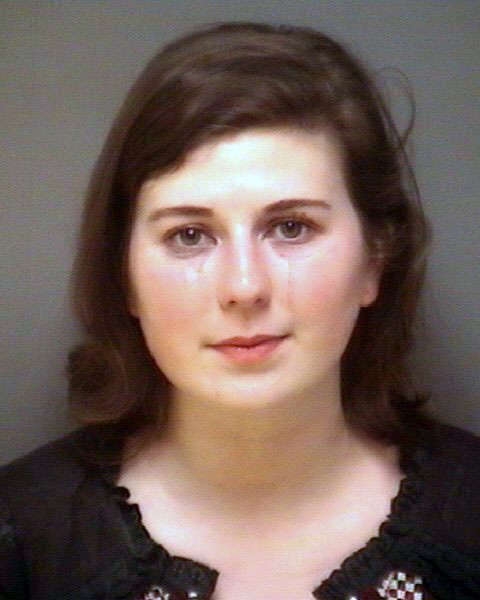 From the Roanoke Times:


A University of Virginia student charged with assaulting two Virginia ABC agents attempting to arrest her for the underage purchase of beer that turned out to be sparkling water has filed a $40 million suit against the state and seven agents.

I don't agree with frivolous lawsuits. However, I support this lawsuit and hope Elizabeth Daly, who was 20 at the time, prevails because no law-abiding student should have to endure what she encountered the night of this scary incident. Here's a repeat of the post I wrote last summer about this incident. I feel just as strongly about it today as I did then because, as I look at her tear-streaked face, it brings home that something similar could have happened to my daughter....

I had no intention of writing about the Charlottesville ABC agents who apprehended a UVa student in the false belief she was underage with beer. Her "beer" turned out to be sparkling water but a series of events led to her arrest and she was thrown in the slammer overnight. ABC agents thought their lives were in danger, and the young lady thought her life was in danger, and it ended up in a big mess.

The actual incident occurred in April but came to light at the end of June when the Daily Progress reported on it after charges were finally dropped against Elizabeth Daly. Reporter K. Burnell Evans wrote "Bottled-water purchase leads to night in jail for UVa student:"


When a half-dozen men and a woman in street clothes closed in on University of Virginia student Elizabeth Daly, 20, she and two roommates panicked.

That led to Daly spending a night and an afternoon in the Albemarle-Charlottesville Regional Jail. Her initial offense? Walking to her car with bottled water, cookie dough and ice cream just purchased from the Harris Teeter in the Barracks Road Shopping Center for a sorority benefit fundraiser.

A group of state Alcoholic Beverage Control agents clad in plainclothes approached her, suspecting the blue carton of LaCroix sparkling water to be a 12-pack of beer. Police say one of the agents jumped on the hood of her car. She says one drew a gun. Unsure of who they were, Daly tried to flee the darkened parking lot.

"They were showing unidentifiable badges after they approached us, but we became frightened, as they were not in anything close to a uniform," she recalled Thursday in a written account of the April 11 incident.

And then there's this:


Prosecutors say she apologized profusely when she realized who the agents were. But that wasn't good enough for ABC agents, who charged her with three felonies.

She was charged with two counts of assaulting a police officer and one count of eluding police.

What stands out to me is that half a dozen agents closed in, at night, on several young college students. The agents were in street clothes, unrecognizable as law enforcement, and apparently their quick flashing of badges was not enough to be seen or confirmed. It was dark, the agents banged on the windows and jumped on the hood of the vehicle. The girls fled, terrified they were being assaulted. Stopped a short distance away by another police officer, Ms. Daly was told the car-jumping, window-banging shadows in the night were actually agents, and she apologized profusely. They slapped the cuffs on her and hauled her to jail.

Local and national news outlets have picked up on it.

As I read yet another account of the incident, I thought about Alicia Showalter Reynolds who was abducted and murdered 17 years ago on Rt. 29 north of Charlottesville, reportedly by a man who had a flashing police light on the roof of his truck and pulled her over. She went missing for two months until her body was found in Culpeper. The murder was never solved ... the case is still open.

That incident was an alarming event for women in the area. Still unsolved, Virginia State Police issued a statement in March of this year:


CULPEPER – Apprehending the person responsible for the disappearance and death of Alicia Showalter Reynolds remains a priority for the Virginia State Police Bureau of Criminal Investigation’s Culpeper Field Office.

March 2, 2013, marks 17 years since Ms. Reynolds was abducted in Culpeper County on Route 29 while traveling from Baltimore, Md., to Charlottesville. Since then the Virginia State Police Bureau of Criminal Investigation’s Culpeper Field Office has received more than 10,040 tips relating to the ongoing case, with 27 of them coming in within the past 12 months. State police continue to ask the public to come forward with any information related to the investigation.

According to witnesses who observed Ms. Reynolds’ vehicle parked on the southbound shoulder of Route 29 on March 2, 1996, a white male, approximately 35-45 years old with a medium build and light to medium brown hair was stopped out with her vehicle. The man, described as between 5’10’ to 6’0 tall, was driving a dark colored pickup truck, possibly a green Nissan. Ms. Reynolds’ remains were found two months later on May 7, 1996, in the Lignum area of Culpeper County.

As news spread about Ms. Reynolds’ abduction, several other female subjects came forward advising that a white male had either stopped them or attempted to stop them while they were traveling along Route 29 in Culpeper County.

Despite the passage of time, state police continue to pursue this case. “Within the past year, the investigation into Ms. Reynolds’ murder was the focus of review by State Police violent crimes investigators from around the state,” said Capt. Gary T. Settle, commander of the Virginia State Police Bureau of Criminal Investigation Culpeper Field Office. “These investigators poured over the entire case file, leads, witness statements, interviews, suspect profiles, evidence, etc., to strategize and pursue any new evidential or technological avenues that could benefit and, ultimately, advance the progress of this ongoing investigation.”

Anyone with information pertaining to the abduction and murder of Alicia Showalter Reynolds is asked to contact the Virginia State Police Culpeper Division toll-free at 1-800-572-2260, or the Bureau of Criminal Investigation toll-free at 1-888-300-0156 or by e-mail at bci-culpeper@vsp.virginia.gov.

At the time, police advised women who were apprehended by a "police" vehicle to find a safe area before stopping, and were assured real officers would know they were not fleeing.

With that in mind, perhaps ABC officers, especially those working in college towns, should be reminded of the Alicia Reynolds tragedy.

UPDATE: A number of newspaper editorials have questioned the validity and wisdom of ABC agents' actions during this incident including the Richmond Times-Dispatch, posting the editorial, Drunk on power?
Posted by Lynn R. Mitchell at 3/26/2014 06:08:00 PM