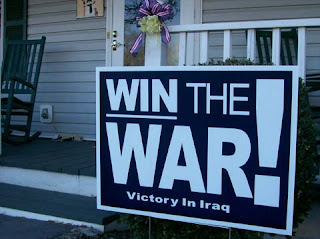 It's pretty funny that you put this post up, since your man GWB is exactly the type of person you are quoting.

If I keep asking you why you won't post my comments, will you keep posting the same thing over and over again?

Here is the complete text of the President's comments from a press conference held at the White House on March 13, 2002:

Question: Mr. President, in your speeches now you rarely talk or mention Osama bin Laden. Why is that? Also, can you tell the American people if you have any more information, if you know if he is dead or alive? Final part -- deep in your heart, don't you truly believe that until you find out if he is dead or alive, you won't really eliminate the threat of --

THE PRESIDENT: Deep in my heart I know the man is on the run, if he's alive at all. Who knows if he's hiding in some cave or not; we haven't heard from him in a long time. And the idea of focusing on one person is -- really indicates to me people don't understand the scope of the mission.

Terror is bigger than one person. And he's just -- he's a person who's now been marginalized. His network, his host government has been destroyed. He's the ultimate parasite who found weakness, exploited it, and met his match. He is -- as I mentioned in my speech, I do mention the fact that this is a fellow who is willing to commit youngsters to their death and he, himself, tries to hide -- if, in fact, he's hiding at all.

So I don't know where he is. You know, I just don't spend that much time on him, Kelly, to be honest with you. I'm more worried about making sure that our soldiers are well-supplied; that the strategy is clear; that the coalition is strong; that when we find enemy bunched up like we did in Shahikot Mountains, that the military has all the support it needs to go in and do the job, which they did.

And there will be other battles in Afghanistan. There's going to be other struggles like Shahikot, and I'm just as confident about the outcome of those future battles as I was about Shahikot, where our soldiers are performing brilliantly. We're tough, we're strong, they're well-equipped. We have a good strategy. We are showing the world we know how to fight a guerrilla war with conventional means.

Question: But don't you believe that the threat that bin Laden posed won't truly be eliminated until he is found either dead or alive?

But once we set out the policy and started executing the plan, he became -- we shoved him out more and more on the margins. He has no place to train his al Qaeda killers anymore. And if we -- excuse me for a minute -- and if we find a training camp, we'll take care of it. Either we will or our friends will. That's one of the things -- part of the new phase that's becoming apparent to the American people is that we're working closely with other governments to deny sanctuary, or training, or a place to hide, or a place to raise money.

And we've got more work to do. See, that's the thing the American people have got to understand, that we've only been at this six months. This is going to be a long struggle. I keep saying that; I don't know whether you all believe me or not. But time will show you that it's going to take a long time to achieve this objective. And I can assure you, I am not going to blink. And I'm not going to get tired. Because I know what is at stake. And history has called us to action, and I am going to seize this moment for the good of the world, for peace in the world and for freedom.

There obviously are other priorities in this war. Some people simply haven't awakened since 9/11 yet. Some find the war a figment of our imagination.

It's not a conventional war. Like Bush said, it may last for years.

Even Bush may not admit it, but this is a war between civilizations that's been going on for centuries.