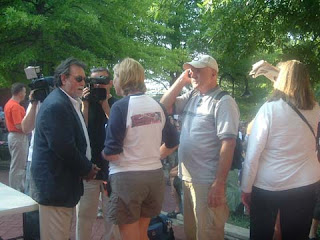 Cindy Sheehan at Friday's anti-war rally in Charlottesville.
I read today that Cindy Sheehan was arrested during her continued tirade in D.C. when the police were called by a DEMOCRAT congressman! She wouldn't leave the office of Rep. John Conyers (D-Mich) after spending an hour trying to convince him to impeach President Bush so she was taken into custody and hauled off to jail. How many conservatives do you see pressing it until they're arrested? I'd be embarrassed to think I had to go that route to get a point across.

No impeachment for the President or the Vice President. Their leadership has kept this country safe since 9/11. I don't know what the liberals are thinking -- perhaps they've forgotten the terror they felt at the idea of their own children being wiped out by terrorists in 2001?

Donkeys must not have very good memories ... but an elephant doesn't forget.

Now that the democrats have forsaken her, and she's spent all the government money she got, she's probably just looking for 3 squares and a roof over her head.

Especially since she sold off her prime tent site in Crawford, Texas.

Wow. That is absolutely HILARIOUS. I must admit though, I wish her the best and a speedy time getting out of jail and back into the spotlight. As with Rosie, it's better that they remain in the spotlight. It continues to show the world how right we are (pun intended) and how absolutely nuts the Left is.