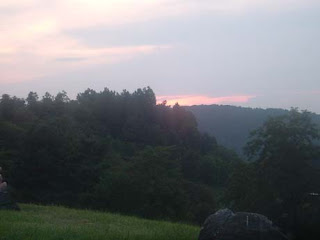 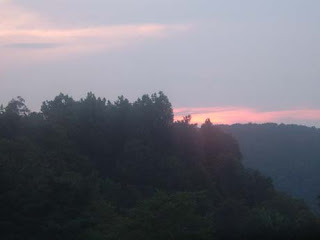 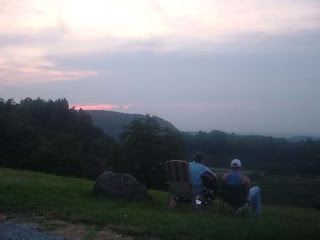 ... and dusk settles over the Valley.

We drove up to Afton Mountain this evening which overlooks Waynesboro and the Valley, and joined a number of others who had gathered to watch the fireworks marking the end of the annual Waynesboro Extravaganza.*

As the sun set and dusk settled over the mountains, a cool breeze kicked up ... a reminder we weren't in the flat lands. Someone with a guitar sat and quietly strummed as we waited ... kids sat on boulders or romped in the grass ... the lights of the Valley came on. The sky was occasionally illuminated with flashes of lightning in the distance ... a lightning bug landed in my hair.

The fireworks show began around 9:50 and lasted until about 10:15 ... outdone only by God's fireworks high above. It was a great show all around and those on the mountain were grateful for the entertainment.

*The Waynesboro Extravaganza began a number of years ago as a celebration of the Fourth of July a week after the one held in Staunton. That was because of the annual free Fourth of July concert held by the Statler Brothers which overshadowed Waynesboro ... so they decided to celebrate Independence Day a week later. That tradition continues today even though the Statlers, after 20 years of celebrating America's birthday, finally retired from the Fourth of July 10 years ago.

Check out Bob Stuart's wrap-up in the Waynesboro News Virginian.