Active military member one of "Win the War" supporters.... 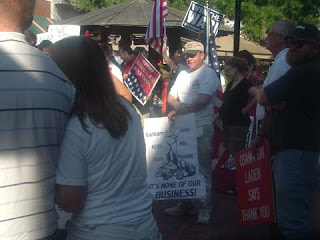 Holly leans her head on boyfriend Josh's shoulder while readying to rally against Cindy Sheehan in Charlottesville on July 20th.
Cindy Sheehan had an active enlistment soldier in her audience last week ... someone who stood with the "Win the War" supporters ... someone who will be leaving soon headed for the Middle East.
His name is Josh, 21, U.S. Army, a member of Dog Company 2-2 SCR. He leaves in two weeks for Kuwait and then a week later will be sent to Iraq, stationed north of Bagdad, for 15 months. His girlfriend is 18 and will begin at Liberty University this fall. They both attended the rally last week in Charlottesville with her mom, an active Augusta County Republican. They were there to support the troops.
While Josh is in Iraq, he will know there are many of us who are supporting him and the other troops, and that we are not afraid to publicly show that support against people like Cindy Sheehan ... he will know the troops are not alone ... he will know we will not let them be forgotten in this war on terrorism.
God bless Josh and all the others like him. God bless Holly and her mom as they continue to support the troops, both in a personal and public way....
Photo by SWAC Girl
Posted by Lynn R. Mitchell at 7/27/2007 06:12:00 PM

If you can, tell Josh from me, God Bless. I met alot of good soldiers (don't tell anyone in the Navy I said this.) while over there. They are THE tip of the spear. Go get "em! HOOAH!

The message has been passed on to Josh ... and thank you, Cargo Squid. You're one of our heroes, too, although I'm sure you're like the rest and don't think of yourself that way. But you are. Thanks for your service, Sailor. (My dad was Navy, WW II, a gunner on the USS Wisconsin.)

SWAC girl, your celebration of the efforts of each one of the soldiers from your region is extremely laudable. Thank you for taking the time.

(And imagine if major newspapers actually interviewed our soldiers and recruits and asked them for their views...)

These guys are heroes even though they don't feel they are.

The disrespect shown our military during Vietnam was deplorable and we must make sure it never happens again ... my generation, your generation, and those that follow.

This is an all-volunteer military that sacrifices, along with their families, so that we can live in comfort and go about our lives without worry of terrorism on our home soil.

Why the anti-war protesters don't get that I will never know.

Meanwhile, I'll do what I can to publicly show support and encourage others to do the same. Your help with that is truly appreciated ... it is nice to have others joining in to carry on this cause.

This is America ... home of the free BECAUSE of the brave. When we forget that ... we will no longer be free.