Thinking of Nate ... and reflecting on Cindy Sheehan's protest of the war 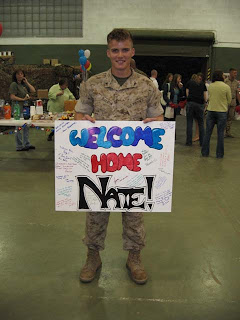 Nate and my kids are friends. Nate, otherwise known as Lance Cpl. Nate Salatin, USMC, was at my house today when I returned from Richmond's State Central meeting. As I pulled in the driveway I saw his Ninja bike parked beside my son's car and smiled.

They were in the living room, their laptops side-by-side on the coffee table, as my son trouble-shooted some problem Nate was having with his computer. A war movie was on the TV and they were commenting from time to time. I said hello, chatted a few minutes, and left them to their computer worries.

I walked out onto the deck and lounged in one of the chairs as a cool breeze blew ... I was unwinding after a long political day ... and I couldn't help but think about yesterday's Sheehan rally, all the misguided youth at that rally ... and Nate sitting in my living room.

Nate ... who just returned from Iraq in May. Nate ... who got one year in at Virginia Military Institute before being activated to go to war. Nate ... who is an older 21-year-old after clearing IEDs in a desert half-a-world away.

We grilled out and Nate joined us for dinner. As we all sat around the table on the deck ... my husband, two kids, and Nate ... I couldn't help but be thankful for the young people who are willing to serve their country for my freedom. I looked around at the lush green trees and plants and thought about how barren and beige-colored Iraq's desert must have been.

Cindy Sheehan yesterday picked on a "Win the War" participant in the crowd, shouting that he was less than 42 years old so he was eligible to go to war.

What I would have liked to hear her say was ... thank you.

Thank you to the troops and their families who make the sacrifices so she can be safe from terrorism to stand on the steps on the Charlottesville Downtown Mall and mock someone in the crowd, shout profanities to the group that included a number of children, and call for the impeachment of a president who has led this country without a terrorism attack since September 11, 2001.

Nate will talk about the war if you ask him. What he went through over there was incredible.

All our troops are incredible.

So tomorrow the kids are planning to go hiking in Shenandoah National Park. Nate is packing life with all the things he missed while away at war. We are grateful to have him here to do that.

Update: Read the post from Flora McDonald of United Conservatives of Virginia who was also at the rally and gives the reader a different perspective.
Update: Gathering of Eagles has linked to this post. Check out comment # 83 under the write-up about Cindy Sheehan's appearance (or lack there of) in Charlotte.
Update: Red State has a follow-up post about the rally and a link to SWAC Girl.
Update: Josh Levy at Win-the-War blog has photos and write-up about the rally with a link to SWAC Girl.
Update: NBC-29 coverage of the rally.
Posted by Lynn R. Mitchell at 7/21/2007 11:38:00 PM