A child's prayer ... "Thank you, President Bush, for keeping us safe" 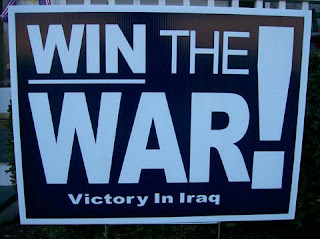 You are officially crazy. A child was praying.... to Bush?

Bush lies. Get over it.

The war in Iraq... wasn't it won already? I'm pretty sure Bush flew onto a carrier to tell us "mission accomplished." Didn't he?

Isn't it more honoring to our soldiers to stop allowing them to die in a foreign land for a people who don't want them there in the first place?

I doubt you'll post this... but I figured I might as well try. "Dissenting comments are not allowed" is a silly rule, by the way, and just breeds resentment within the rest of the blogosphere.

Shouldn't even have to say this ... it's perfectly clear to most ... the child was praying to God and thanking Him for President Bush's leadership in keeping us safe from terrorism. My pastor does it on Sunday mornings, I do it daily ... it's obvious to most people what was meant.

Must have been a slow day for you to have to come over to SWAC Girl and snipe....

I think we've all had our share of snipers. I used to be one of them, posting away my own pithy comments on another guy's blog. Sniping ends up with no accomplishments, there's no constructive development from it. Just anger and frustrations develop.

Good comeback, SWAC. I need to get in touch with the local bloggers sometime but I've lost all the contacts. Get in touch sometime if you can.

Steve, good to hear from you. Email me at SWAC.Girl@gmail.com.