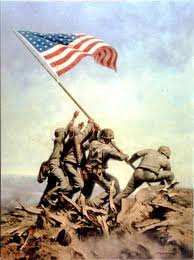 From Don Williams, chairman of the Chesterfield County (Va) Republican Committee, is a reminder of the importance of today in history....

"Amid those who would retreat into isolation ... I prefer to commemorate the bravery of those who fight to secure our freedoms. On this date in 1945, 5 Marines and a Navy Corpsman raised the American Flag atop Mount Suribachi in the Battle for Iwo Jima. We are fortunate this event is depicted in the historic Rosenthal photograph. It is an icon of freedom for all. Thank a WWII Veteran today before its too late."

Many recognize the Joe Rosenthal photo that captured the moment when five Marines and one Navy Corpsman raised the American flag on Mount Suribachi during the battle for Iwo Jima.
Few remember the bloody battle by land and by sea nor the number of lives lost before and after that February day when the flag was raised during a battle that raged until March 25, 1945, and helped lead to the end of World War II. With the current unrest in the Middle East, it is important to remember this past history.