Rush: "Our money is on George Allen here at the EIB Network" 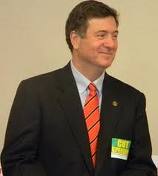 Rush Limbaugh on Wednesday's radio program said, "Our money is on George Allen here at the EIB Network." It came about as he talked about the news that current Sen. Jim Webb would not run for reelection:


RUSH: Jim Webb, ladies and gentlemen, the senator from Virginia, says, "No mas, no mas," not running anymore. They continue to shuffle the decks on the Titanic of the Democrat Party. Could this open the doors for George Allen to come back? He's making noises about that and I -- (interruption) same thing, Snerdley, he's making noise about that, he's running, same thing. Jeb Bush said he's not running, making noise about it. But he might. Who knows? Everything's wide open.

Well, look, poor old F. Chuck Todd up there on TV. The guy's in mourning over Jim Webb saying he's not gonna run anymore. It's amazing to watch these Drive-By Media people report the latest Democrat to announce he's not gonna run. I will never forget, I think it was in Sacramento, maybe I had just moved to New York, but late eighties, whenever it was that California Congressman Tony Coelho announced that he was no longer gonna seek office. He got involved in some kind of corruption scandal. I don't remember what it was. Barbara Walters was hosting Nightline that night, Ted Koppel was out, and Barbara Walters was literally asking all her guests, "Can the nation survive? Can we go on? Will the Congress survive?" And of course these people were answering it in that context, "I think so, Barbara. I certainly hope so." So now here's Jim Webb, he's getting out, F. Chuck Todd in mourning, and they're happily talking, "Hey, maybe get the eyebrow back in there, Tim Kaine. Maybe he could come back and seek this office." Our money is on George Allen here at the EIB Network. [emphasis added]