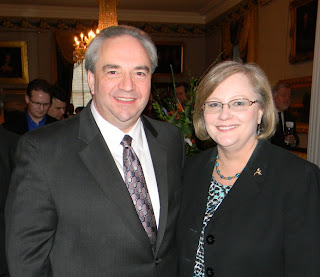 Bill and Jean Ann Bolling.
I posted at the Washington Examiner about Wednesday's bloggers day in Richmond as writers statewide gathered with Lt. Governor Bill Bolling:


While some politicians cast a wary eye toward bloggers, Virginia's top Republican office holders have spent the past five years recognizing these writers who report on government and often talk one-on-one with elected officials.

It's a great idea. The first impromptu meeting five years ago at the Republican Advance with then-Attorney General Bob McDonnell brought together a dozen conservative bloggers to talk about this rising form of communication. That continued with the annual gatherings hosted by Republican Lt. Governor Bill Bolling at the Capitol for the past four years which has provided a means of fostering the lines of communication with the eclectic group of writers.