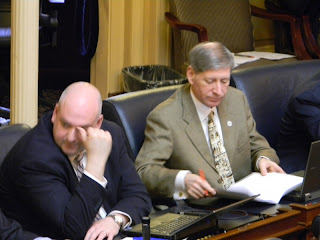 Del. Todd Gilbert (left) and Del. Steve Landes at General Assembly.
Del. Steve Landes (R-25th House District) had an idea in 2000 to bring together the Republicans from Staunton, Waynesboro, and Augusta County at a monthly breakfast held in centrally-located Staunton. Each unit had, until then, been isolated from the others and many Republicans who lived in close proximity didn't know each other.

The breakfasts began small and at Shoney's in Staunton but soon moved across the road to Rowe's and soon became more organized with a committee of six ready to lead consisting of the Staunton chair and his wife, the Augusta chair and his wife, and my husband and me. The breakfasts continued monthly for eight years until 2008 when new leadership decided to discontinue the popular event. It had been a good idea. Many thanks to Del. Landes for his leadership in the SWAC area.