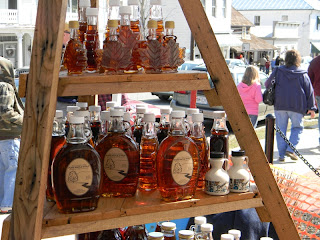 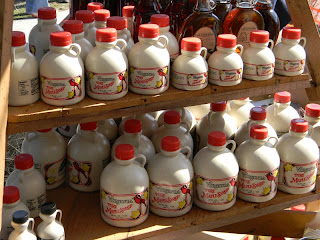 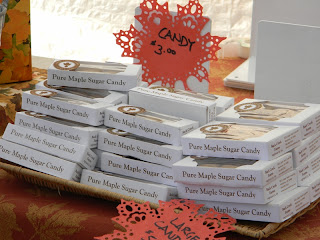 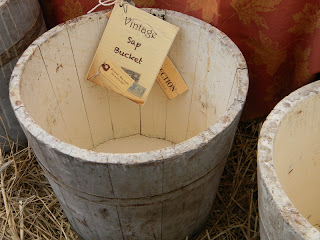 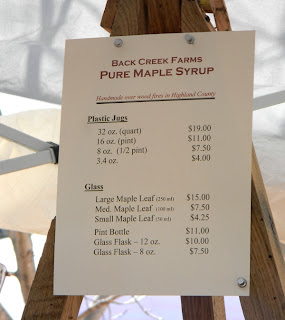 We met a delightfully personable couple at their booth set up on Monterey's Main Street at the Courthouse. Pat and Valerie Lowry, owners of Back Creek Farms in southwestern Highland, brought their maple products to town to sell since their farm is not one of those on the public tours. Pat chatted with customers while Valerie, setting up behind the table and manning the register, apologized for being a bit behind that morning as she unpacked products to add to the display and searched in her purse for a business card.

Pat began sugaring when he was eight years old. Their website tells the story:


Making maple syrup has always been a way of life on Back Creek. Pat remembers, when he was young, a layer of steam filling the valley as each farm along the creek made enough syrup for themselves, and just a little extra to sell. Now, ours is the only working sugar house left on Back Creek.
Pat started helping his father make maple syrup when he was 8 years old, and it was always his favorite time of the year. While we do use some “modern” pumps, tubing and an evaporator, we also use buckets and the original open pan that belonged to Pat’s great-grandmother — whose legacy of hard work and dedication is the inspiration for preserving the unmistakably rich, smokey flavor of syrup made over wood fires.

Our syrup is called “Back Creek Farms” because we gather sugar water from trees on several of the old farms along the creek. These farms have been producing maple syrup since the early 1800’s and we hope to continue the tradition for years to come.

Pat said it was some of the best maple syrup he had ever tasted this year ... warm days and cold nights had made for darn near a perfect sugaring season.

Extensive rain in the days leading up to the first weekend of the festival saw creeks at full bank and flooded fields, and the Lowrys had straw on the ground of their booth to lessen the muddy conditions. Not only was the hay working on Saturday but it also added that barn smell of hay under the canopy.

We bought some of the Lowrys' syrup and look forward to using it on pancakes and waffles in the near future.