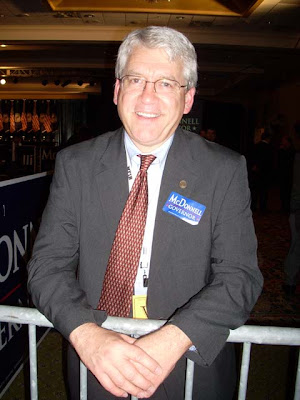 
Cross-posted at the Washington Examiner....

On Thursday the announcement was released that Mike Thomas had joined the George Allen for U.S. Senate campaign as Campaign Manager, a signal that the campaign is relying on top-notch proven leadership while aggresively moving ahead to win the Republican nomination and the Senate seat.
Thomas has a long history with Gov. Allen and was the manager of his campaign for Governor in 1993 as well as serving as Chief of Staff and State Director during Sen. Allen's time in the U.S. Senate. He has also served the Commonwealth of Virginia over the years as both the Secretary of Administration to the Commonwealth, and as Director of the Virginia Department of Information Technology. The past fifteen years he has served as the First Vice Chairman of the Republican Party of Virginia.

Thomas, who has worked as Senior Vice President at McGuire Woods Consulting in Richmond since 2006, will leave that position to rejoin the Allen team for the 2012 U.S. Senate race.

As part of the original A-Team that helped secure a come-from-behind victory for Allen in 1993, Thomas remained with him through his successful 2000 U.S. Senate race. An ally and close personal friend through the years, his presence will be a welcome addition for the campaign.

Allen, in announcing the news, spoke fondly of his friend:


“Susan and I are thrilled to have Mike Thomas on board to lead our campaign. Mike understands campaigns are won with principles and ideas advocated at the local level, home by home.
Mike is a trusted friend who Susan and I feel blessed to have once again as a proven leader of our team. Mike has the necessary experience and personal knowledge of Virginia, its people, and our values to lead our grassroots insurgency. His addition makes our team even stronger, and together we will build a campaign focused on bringing Virginia’s voices, views and values back to the U.S. Senate.”

That endorsement says just about everything about the new campaign manager who is one of the most well-respected men in Virginia Republican circles. A tireless worker for the Party who has served as interim Party Chairman on several occasions, he was honored in 2009 when the Republican Party of Virginia named its annual Volunteer of the Year award after him, making it the Michael Thomas Award.

A graduate of the University of Richmond, Thomas is a husband, father, grandfather, and Children's Church leader in his church. His role in the Allen race will be pivotal as he presents a calm, guiding influence in his leadership position, something he has been doing for years and a role he is familiar with from past campaigns.