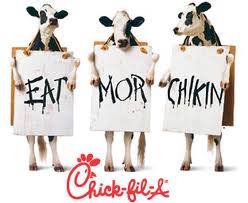 Marking his 90th birthday, Chick-fil-A founder Truett Cathy of Georgia was fested in Atlanta by 1,100 of his closest friends. Who was on the guest list? Georgia Governor Nathan Deal, Atlanta Mayor Kasim Reed, comedian Jeff Foxworthy who commended Mr. Cathy on his closed-on-Sundays policy, and Coca-Cola president Sandy Douglas, to name a few. He was serenaded by Christian singer Michael W. Smith and the Atlanta Symphony Orchestra.


Speaking on video from Dallas, President George W. Bush said, “You are a man of great faith who leads by example.”

In a report from Atlanta's NeighborNewspapers.com:


Event co-chairs Tom Cousins, with whom Cathy developed the East Lake golf community, and Ambassador Andrew Young took the stage to say Cathy practices what he preaches.
“He takes business to a biblical level,” Young said. “There’s about 60,000 folk working [for you] and you’re feeding their families. That’s a quarter million folk that you’re feeding every day. You even turned Jeff Foxworthy into a preacher.”

Taking the stage, Cathy displayed his own humor.

“If I make it another 10 years, I’ve got it made,” he said. “Very few people die after 100.”
Cathy, born March 14, 1921, is married 63 years to the former Jeannette McNeil and father to Dan, Don and Trudy, all of whom work with him, and is grandfather of 12 and great-grandfather of seven children.

Got to admit that Chick-Fi-lA is my favorite fast food restaurant, and the opening of the Waynesboro restaurant was a happy day in the SWAC area. Mr. Cathy's policy of not opening on Sundays is a respected tradition reminiscent of the former Richmond Ukrop's grocery store policy of closing on Sundays.