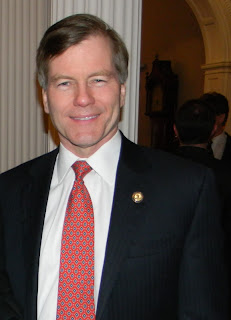 Governor McDonnell has focused his time in office on getting Virginia’s budget back in order by reducing spending to 2006 levels and not raising taxes, and ensuring that Virginia is home to an environment conducive to private sector job creation and economic growth.

Last night the Governor sent down amendments to the 2011 budget, and we wanted you to know about two of the biggest ones. The Governor has vetoed legislation that would increase the medical malpractice cap in Virginia.

In announcing his veto, the Governor remarked, "Raising the cap for medical malpractice judgments to $3 million over the next twenty years, without further reforms in the medical malpractice litigation system, will not meaningfully protect against health care cost increases. Mandates included in the federal health care law, which is currently in litigation, will cost Virginia an estimated $2 billion over the next 10 years if implemented, and are creating great uncertainty in the health care system. Thus, adding to system costs at this time without other offsets should not occur." You can read more about this action here: Governor Vetoes Medical Malpractice Cap Increase- DC Examiner

The Governor has also amended the budget to eliminate state taxpayer funding of the Public Broadcasting System.

The Governor called for this before the General Assembly session, and he is standing firm for the principle that government should focus on its core functions, and get out of funding programs and services best left to the free market. The Governor stated, "In a world of broad and diverse options for news and entertainment, government should not be funding one specific channel as it competes against others in a free market. Television and radio broadcasts are not core functions of government. That $4.2 million can be better used elsewhere." And you can read more about the Governor's effort to save taxpayer dollars and refocus state government here: Governor Eliminates State Funding for Public Broadcasting- NBC Washington
Posted by Lynn R. Mitchell at 3/31/2011 07:48:00 AM