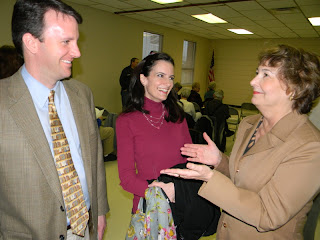 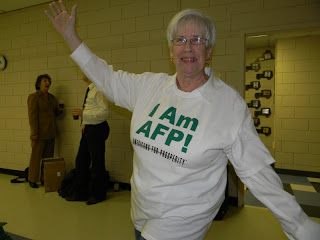 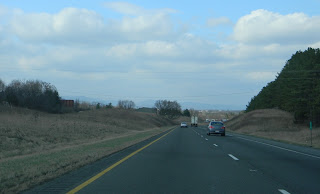 On the road again ... traveling beautiful I-81 in the Shenandoah Valley. 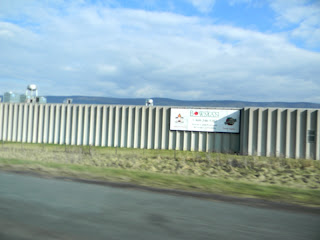 You know that Bowman apple juice and applesauce you like? Here's the factory located along I-81 in Shenandoah County. 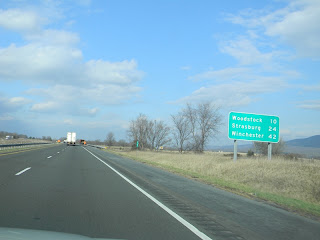 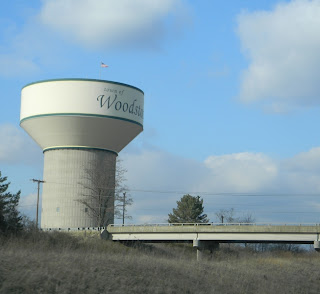 I always love the American flag on top of the Woodstock water tower. 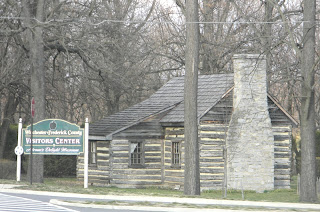 Winchester ... and we passed their Visitors Center on the way to our destination. 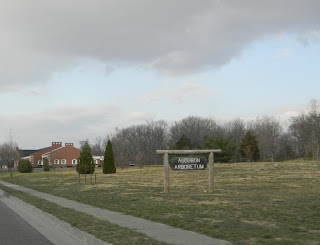 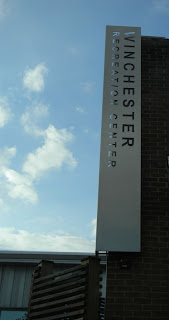 Just the place we were looking for. Thanks to Trixie's GPS we made it in plenty of time.
When new Americans for Prosperity-VA Director Trixie Averill invited me to join her on a road trip to Winchester for her first official AFP "Cut Spending" town hall, I was all too happy to jump in the car and go. We've done similar trips throughout the years and, as in the past, we talked the entire time about everything from her nervousness with her first meeting to politics to life.

Driving up she wondered, "Is anyone going to show up?" and "Will I do okay?" and "Do I have everything?" To which I replied, "You've been doing this for years! The only thing different is you're wearing a different hat. You'll do great."

Sure enough, 50-60 people crowded the room at the Parks and Recreation building to hear from Del. Ben Cline and hometown girl Kate Obenshain who is vice president of the Young America's Foundation but probably best known as a frequent commentator on Fox News Channel.

Trixie did great, Ben did great, and Kate did great. There were thought-provoking questions and some lively, animated discussions but one thing was clear: hard-working Americans care about their country and the future that is being left for their children and grandchildren.

Shenandoah County activist Suzanne Curran was there with friends from her area, wearing her AFP shirt and encouraging folks to get involved. She hugged Trixie, hugged Ben, hugged Kate, and hugged me ... and then hugged other Shenandoah friends as they arrived.

A 12-year-old boy who attended with his mom stood up and announced that most of the students in his school aren't happy with Barack Obama, and then perhaps appealing to the pretty brunette lady standing up front, told Kate Obenshain that he always watches Fox News.

Afterward, when questions had been answered and business cards exchanged, it was time for a late dinner with Trixie and Ben so off we went to a nearby Ruby Tuesday's to talk about the meeting and unwind from a long day. This must be my week to catch up with Ben because our paths are crossing three nights in a row.

By 10:15 Trixie and I were back on the interstate, this time pointed south, still talking about the meeting and -- as we do every time we travel together -- talking about our families and our kids. We are involved in conservative causes because of them.

Americans for Prosperity, Young America's Foundation, and Republican representatives like Del. Cline ... all are working for our conservative principles.