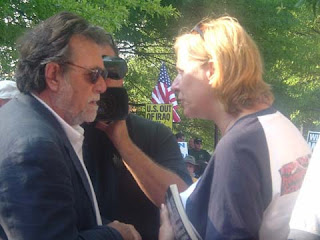 Cindy Sheehan brought her anti-war protest to Charlottesville in 2007.
At least Cindy Sheehan isn't a hypocrite.

While President George W. Bush was in the White House, anti-war protesters hit the streets of Staunton on a regular basis, especially the Coalition for Peace and Justice group, holding signs against the war and President Bush, holding signs with the number of military members killed, and even dressing up as the Grim Reaper. Once Barack Obama became president, they stopped protesting. But we're still at war.

Cindy Sheehan, who protested the war all along even in Charlottesville in 2007, is still at it even after a Democrat is in the White House. She's beating the same drum no matter what Party is in power in D.C. Over the weekend, she addressed a group of activists in California, asking, "Where the (heck) have you been? Are the wars only wrong when there's a Republican president?"

She went on to say, "You can like Obama, but you can't like the policies if they're the same as George Bush's."

I disagree with her anti-war sentiments but you can't call her a hypocrite.