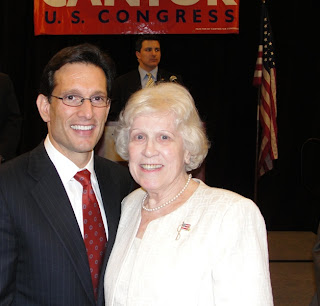 Majority Leader Eric Cantor and my mom at his Advisory Council meeting.
March 23, 2011 - Richmond, Virginia
My mom, who lives in Virginia's 7th Congressional District, was honored last night to lead the Pledge of Allegiance at Congressman Eric Cantor's Advisory Council meeting Wednesday night that was attended by about 500 people. She was thrilled to do it. Active with the Chesterfield County Republican Committee, my folks are regular attendees of Rep. Cantor's quarterly advisory meetings, looking forward each time to hearing from their congressman and seeing fellow Republicans.

Eric Cantor's Advisory Council was formed during the 2000 campaign because he has always believed that the best ideas come from the people of the 7th District -- not from big government in Washington. Holding meetings in Chesterfield, Hanover, and Henrico counties, the meetings offer an opportunity for citizens to voice their concerns, ideas, and support.

Mom has served as Rep. Cantor's representative in the National Silver Haired Congress and campaigns during his elections in addition to her other Republican volunteer work. Leading the Pledge was something she was honored to be asked to do. Way to go, Mom!