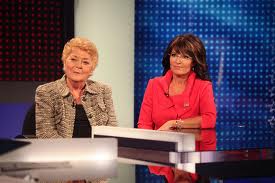 Fox News photo.
Geraldine Ferrero was ahead of her time. As the Democratic vice presidential candidate running with Walter Mondale in 1984, she made a splash on the nation and impressed young women on both sides of the aisle.

That race was lost in a landslide to President Ronald Reagan and his vice president, George H.W. Bush, but Ferraro had smashed yet another glass ceiling for women. I didn't agree with her politics but I certainly admired her willingness to stand up for what she believed in and dive into the national political scene.

Geraldine Ferraro died Saturday at the age of 75 of complications from multiple myeloma, a blood cancer that she had battled for twelve years. Her family released a statement saying, "Geraldine Anne Ferraro Zaccaro was widely known as a leader, a fighter for justice, and a tireless advocate for those without a voice. To us, she was a wife, mother, grandmother and aunt, a woman devoted to and deeply loved by her family. Her courage and generosity of spirit throughout her life waging battles big and small, public and personal, will never be forgotten and will be sorely missed."