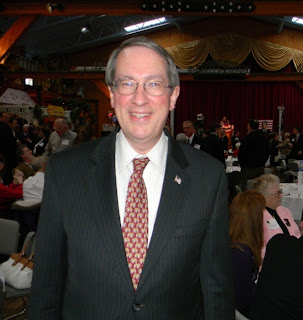 He told me about an email chain he has with his sisters in Massachusetts and Florida, and how they correspond with each other. Recently the Massachusetts sisters had asked if he had any knowledge of how the maple sugaring was going in Virginia and the Congressman, busy in D.C., responded, "No."

In response, the Florida sister sent a reply that she had information about the maple sugaring in Virginia and sent a link to ... SWAC Girl! It was the posts from our Saturday at the Highland Maple Festival the second weekend in March. The Congressman laughed and said, "From that I learned that the sugar water was running great this year, it's one of the best batches they've had in years...."

He described it a little more and I laughed as he talked, remembering the eighteen posts I had written along with dozens of photos about that wonderful day in the mountains of western Virginia ... and I was amazed and delighted. Someone in Florida had read about the maple festival through my blog which was a good thing for Highland County, for Virginia, and for SWAC Girl! It was nice that the Congressman shared that story, and I thanked him for doing so.

We have lived in Virginia a bit over 3 years. I had no idea there was maple sugaring here.