Delegate Chris Saxman with Sean Hannity
at Presidential Debate in SC
May 15, 2007 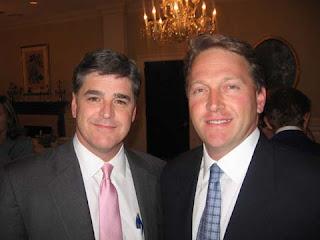 Delegate Chris Saxman (R-Staunton) travelled to Columbia, South Carolina, Tuesday to address GOPAC's members at the 2007 Spring Charter Meeting and Presidential Debate. He participated in a panel discucssion of state legislators on Republican successes in the respective state legislatures.

Delegate Saxman was joined by Speaker Mark Rubio (Florida House of Representatives) and Delegate Leroy Myers (Maryland House of Delegates) at GOPAC for the panel on Republican successes in the statehouse. South Carolina Governor Mark Sanford, former RNC Chair and current RPV Chairman Ed Gillespie, and various other elected officials across the nation were in attendance and addressed the meeting.

"I was humbled to be considered for this panel and enjoyed discussing the proud history of success Virginia Republicans have experienced over the past decade," Delegate Saxman said. "The Republican Party is growing stronger because of grassroots networks such as GOPAC, and it is important to continue to build upon our successes."

In April, Delegate Saxman went on GOPAC's radio show "Leading the Majority" with Rick Tyler and Vince Haley, where he discussed recent successes in the 2007 General Assembly and his role as chairman of the Cost Cutting Caucus to reduce state spending.

The GOPAC Spring Charter Meeting began Tuesday with panel discussions followed by a "First of the South Presidential Debate" and continued through Wednesday.
Posted by Lynn R. Mitchell at 5/17/2007 04:35:00 PM