From the Blue Ridge Mountains to the Rocky Mountains.... 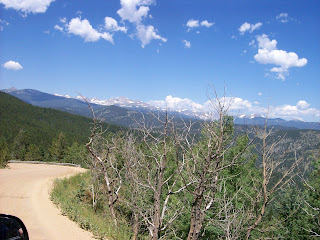 The sight of the Rockies has awed me since I first laid eyes on them at the age of 20 ... their majesty, their snow-covered peaks in the middle of summer, the sheer beauty of something so magnificent. How did early miners and settlers survive in this harsh environment? How did they manage to eek out a living in extreme winter conditions?

I'm a history buff anyway which is one reason I love my birth state of Virginia ... the birthplace of America. The history of our western states intrigues me, too, and I enjoy visiting the places I've read about in books.

The main part of Colorado's settling began because of mining and then after World War II the skiing industry took off. Men from the 10th Mountain Division that had trained at Camp Hale high in the Colorado Rockies near Leadville came home and began or managed ski resorts in Vail, Aspen, and throughout the U.S. When I learned to ski in Aspen in the 1970s they laughed upon hearing I was from Virginia ... I should have no problem skiing those hills after learning in the Rockies, they said, except for the ice. Yep ... we have ice on the slopes of Virginia.... 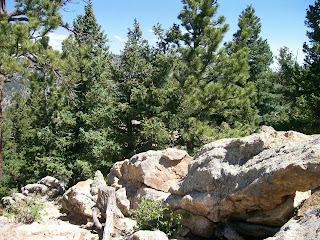 The weather this trip out has been gorgeous -- warm by Colorado standards, clear, and breezy. It's dry here and many areas have fireworks bans for the Fourth of July because the fire danger is high. Boulder Creek has dozens of swimmers, tubers, and kyakers every day as folks try to cool down in the icy-cold water.
The music ... ah, the music has been great ... Austin-style folk music that is funny or poignant or sings of memories of the mountains. We jammed outdoors Saturday night in the Colorado summer evening under a full moon with a group of first-class musicians from Colorado and Texas, including my brother-in-law, until the wee hours of the morning. Guitars, mandolin, harmonica, banjo ... even some Virginia influence was injected with the Patsy Cline classic, "I Go To Pieces." It was a perfect evening with friends and family.
Yesterday we were over 10,000 feet in elevation and playing in snow drifts as we battled one another with well-aimed snowballs.
High in the mountains overlooking the flat lands we're able to see fireworks most evenings as folks get a jump on the Independence holiday.
Big Fourth of July plans are in the works for tomorrow....

The hills of Coors are nothing more, than Blue Ridge wannabees...

"When you're talking home, you mean the Old Dominion,
Just southeast of Heaven to the surf and the hills,
She's the best of 13 sisters and 37 more,
Sweet, sweet Virginia always keeps an open door."