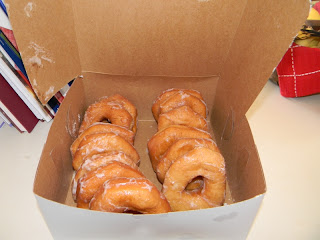 Maples donuts from the Mill Gap Ruritans.
It's a tradition that many honor year after year as they make the annual trek to Monterey during the Highland Maple Festival to buy donuts handmade by the Mill Gap Ruritans. Their trailer is easy to find. Located one block south of Main Street (Rt. 250), it's the one with the line of people backed up the street, usually 50-deep, waiting to buy fresh hot maple donuts.

Selling the much sought-after maple donuts at the festival is Mill Gap's number one fundraiser, and helps them help others throughout the year. People cheerfully stand in the long line, waiting up to two hours for their opportunity to buy a single donut for $1, half a dozen for $4, or a dozen donuts for $7. It's not unusual to see folks walking away with six or eight boxes containing a dozen donuts in each. Many take orders for others so all don't have to stand in the long line.

Running into friends from Augusta County, they had an order from a family member but looked at the long line and debated whether to brave the wait. I wonder what the final decision was.... 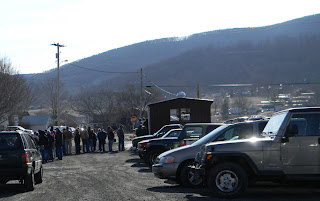 The donut line was relatively short Saturday at 9 a.m. The wait, however, was still an hour.


Standing in line presents the opportunity to meet those standing nearby. One lady in line drove down from Pittsburgh, Pa, for her annual donut fix. As a student at Mary Baldwin College 15 year ago, she fell in love with the festival and its maple goodies, and still visits each year.

Watching customers leave with six and eight dozen donuts explained much of the long wait. Even at that, the line never shortened and folks settled in and talked with those around them while inching their way to the donut window. Some things never change, and the Mill Gap Ruritans still make the best maple donuts.