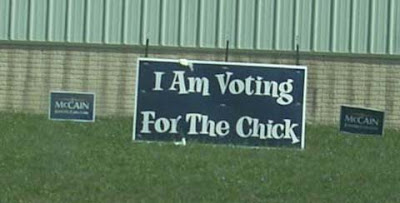 The "I Am Voting For The Chick" signs have created a buzz in Augusta County ... two large 4' x 8' signs in front of Blue Ridge Lumber in Fishersville and especially the one (pictured above) facing the street leading out of Augusta Medical Center.

I talked with Tom Sheets, owner of Blue Ridge Lumber, to find out the story behind the signs. Anyone who knows Tom knows he's a straight-talking, straight-shooter just like the man he supports for President, John McCain.

Tom told me the origin of the remark came the day after McCain had announced Sarah Palin as his Vice Presidential pick. As he was walking into the Stonewall Jackson Hotel in downtown Staunton, he saw Councilwoman Andrea Oakes sitting at a table with some of her friends. She waved at him and said, "Hi, Tom," and he pointed his finger and said, "I'm voting for the chick!"

Later he talked with a sign guy about about getting a 4' x 8' made that relayed what he had said to Andrea. The rest, as they say, is history. As the sign guy was erecting the catchy banners, a number of folks drove by honking their horns in agreement.

Tom told me he thinks Sarah Palin is the face of America ... not because she's a woman, but because of what she says and who she is. I agree, and told him she is like my friends, my neighbors ... everyday people that I know.

Sarah Palin is, indeed, popular in the Valley and a great asset to the McCain ticket. Thanks to Tom Sheets for supporting her in his unique way.

Email ThisBlogThis!Share to TwitterShare to FacebookShare to Pinterest
Labels: I Am Voting For The Chick, McCain-Palin 2008

That is so cool, Lynn!

This shows there is more than one way to show support for Sarah Palin! Thanks for stopping by, Donald.