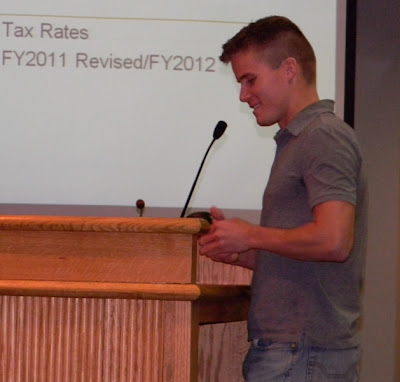 Nate Salatin, Sergeant in USMC and graduating senior at VMI. He was the Virginia State 4-H President under Jennifer Mercer's leadership in 2004. A year later, there are still no answers as to why Augusta County 4-H Leader Jennifer Mercer was removed from her position. 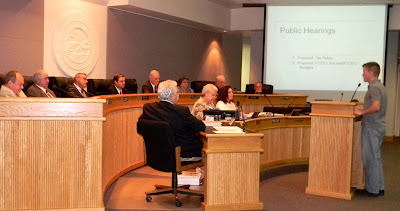 Nate is in the top 4% of his graduating class at VMI and has the highest GPA in his major. 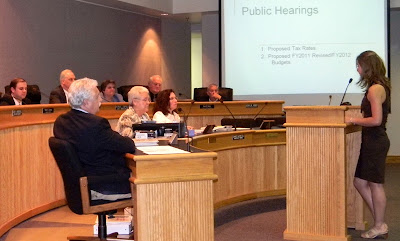 Grace Short, a member of 4-H from Cloverbuds until she aged out last year, addressed the Augusta Board of Supervisors on behalf of Jennifer Mercer. 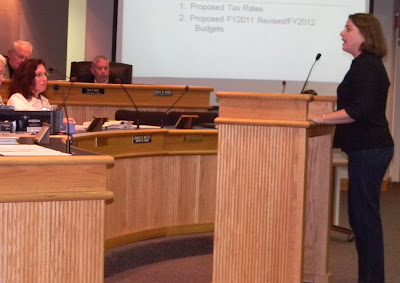 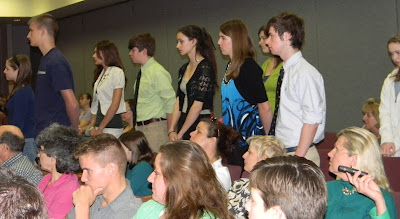 4-H Honor Club members stood in support as members of their club addressed the board. 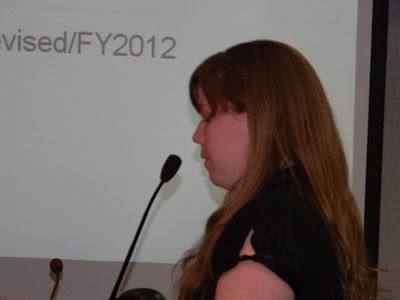 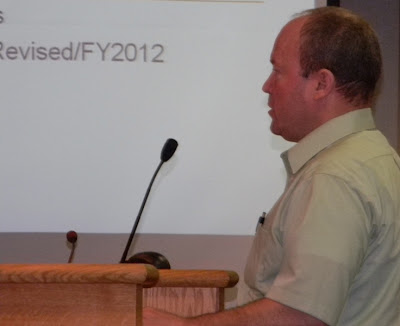 Art Salatin read a letter from his son, Josh, who could not attend the meeting. Josh was part of the 2005 4-H Envirothon Team that won Second Place in the National Competition and participated in many other clubs within the 4-H program. 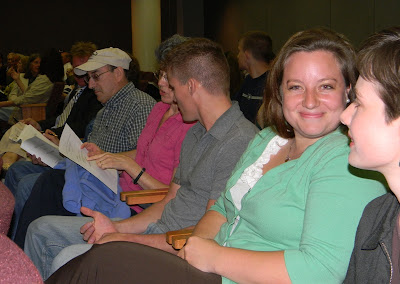 Some of the home schoolers, grateful for Jennifer's leadership, who turned out for Wednesday night's meeting.


[A year later, there are no answers to the questions surrounding Augusta County's abrupt removal of 4-H Extension Agent Jennifer Mercer. This is a rerun of the post from April 2011 when dozens of 4-H students showed up at a supervisor meeting to stand in defense of the woman who had spent years mentoring them.]

In front of a crowd at the Augusta County Government Center, a young man with military haircut, chiseled features, and military-straight posture, approached the podium.

"Good evening, and thank you for allowing me to address you tonight. My name is Nate Salatin and I am a sergeant in the United States Marine Corps, and will be graduating from Virginia Military Institute in three weeks."

Nate, 25, addressed the Board of Supervisors Wednesday night in light of their recent decision to release 17-year Extension Agent Jennifer Mercer after proposed cuts to the county budget. Under her leadership, he rose through the ranks and became Virginia State 4-H President in 2005.

Locked out of her office in April with no notice and directed to have no contact with the clubs even though they were in the middle of 4-H competition season has left many scratching their heads and wondering why such a move would be made when Mercer's contract runs through the end of May. The award-winning youth of the county were left without their adviser as they prepared to enter tough state, regional, and national competitions.

On the county's behalf, they have noted it is a personnel issue and they will not address the issue further. For parents and children who have worked with Mercer, there are no answers to their many questions.

Because the county reportedly indicated to Mercer it was a budget issue, 4-H members attended the county's Wednesday budget public hearing to ask that Mercer's job be reinstated and, hopefully, that she be retained. Person after person talked about the long hours of work and dedication, and the leadership that is now lacking in one of the most agriculturally rich areas of the Commonwealth.

Nate separated what he had learned from 4-H into three categories:  learning, leadership, and service. He noted that learning through 4-H was fun in a competitive atmosphere while gaining new skills and knowledge. Leadership was taught through example and experience as young people prepared to become future leaders in society and were taught intellectual and critical thinking skills. Nate is a good example of his third reason, service. Joining the Marines out of high school, he then entered VMI to begin an education that was interrupted with two deployments to Iraq during Operation Iraqi Freedom. He will graduate from VMI in May.

Grace Short, 19, whose family owns a farm in southern Augusta County, participated in 4-H from the earliest club, Cloverbuds, until she aged out last year. She was in Honor Club as well as many others, competing and winning awards throughout the years along with her three sister. All four attended the meeting along with their mom. Grace said she was surprised at the action taken by the county against Mercer, wondering if they had besmirched her good name, and questioned why they removed her without any public input or feedback while continuing to pay her through the end of her contract in May.

Home school mom Deanna Persinger, a long-time adult volunteer leader with 4-H, noted that the youth of 4-H are stewarts of the environment as well as future leaders. She was disappointed when the county unexpectedly released Mercer one week before a top competition for one of the teams that had to pull itself together, go to Kentucky to compete in regionals, and is now advancing to nationals.

Many of the dozen speakers touched on the fact that Mercer's time is tireless, that the children are her mission. They noted the variety of clubs and activities offered ... from learning Robert's Rules of Order and public speaker to building riding rings at Expoland and extensive community service. Ann Murray, who was in the 4-H horse club as a child, said she would have loved to have access to the varied clubs that are available today, and commended all that is done through the Augusta County 4-H program, one of the best in the state.

On a personal note, I can say that the lessons of 4-H ripple out into the community. As teen coordinator and president of the local home schoolers for 16 years, I saw the leadership skills that were taught to the youth of the county and, specifically, the home schoolers who not only participated but provided leadership through parents interested in seeing the program succeed.

Nate, who excelled at 4-H public speaking throughout his high school years, taught a public speaking course for the local home school students during his junior year in home school high school. The classes, which took place in my living room, were attended by over a dozen students from the age of 12 through 18. In addition to their group was me, a 40-something mom who had been a shy child who grew into a shy adult, afraid to speak publicly in school, opting instead to take a zero from the teacher rather than present an oral book report.

I took Nate's class along with the kids, making notes and watching and listening. I participated along with the others, going through the exercises and gratefully leaning because Nate provided the tools I needed to comfortably address public crowds ... tools that had been taught to him through 4-H ... and I have passed it along to others.

Interestingly, my 83-year-old mother was in 4-H when she was a child, and to this day we have a woven-top wooden foot stool she made in a 4-H class which serves as a reminder of what this group has done to help the youth of America.

I'm not sure what is going on with this issue but there are legitimate questions from the community. Budget issues are understandable in these stressed financial times. However, money spent to turn out such exemplary members of society seems better utilized than having to later fund juvenile facilities for those involved in drugs and gangs. 4-H offers our young people in our rural location a productive activity and prepares them to be contributing members of our communities.

Mercer, who attended the meeting, was surrounded by those she had mentored throughout the years. Speaker after speaker spoke highly of her dedication and devotion to the youth of Augusta County and, indeed, on Thursday she wrote on Facebook, "Augusta County 4-H Members (and Volunteers) rocked the house last night. They made me as proud (and humble) as I have ever been. I can't say thank you enough."

In 2009 and 2010, the Rocket Boys were shot down by Augusta County, causing a missed opportunity to open the world of science to our students through volunteers who were professionals in their fields. Now 4-H has lost its leader and funding.

What exactly is the message to the young people of Augusta County? And what is the county's vision for its future as well as that of these young people? Will there be a future for them in our beautiful central Shenandoah Valley location?