France, what have you done? 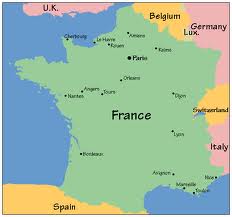 It remains to be seen what impact the presidential elections in France will have on America but the immediate reaction is, "France, what have you done?" They voted in a socialist leader.

Rather than get too melodramatic about it, I prefer what my friend Donald Douglas at American Power wrote:

"I'm not so pessimistic on French life chances following the vote. The socialists will just continue to do what France has been doing for decades --- consolidate state power over the individual. The most important implication will be for the EU as a whole. The common European project is in tatters and could very well fall apart if Hollande adopts a nationalist agenda vis-a-vis the EU. That in turn depends on how Germany reacts to the election. It's a Franco-German condominium that holds up the entire European edifice. If Berlin moves to promote more austerity, for the French as well as the EU all together, we can see expect even more strains on political and monetary union going forward. I'm not so bullish on the EU continuing forward much longer in its current state. There may be some changes, cutting off some of the more peripheral partners for example to save the core members of the union."

Donald also has links to others commenting on this historical event.

I'll have to get one of my 16-year-old nieces, both fluent in French (and one who lived in Paris for a number of years), to translate. LOL.