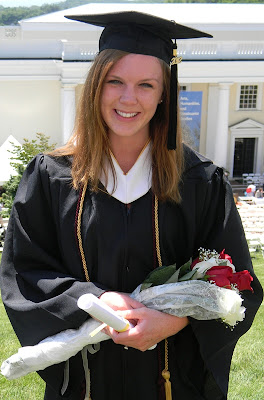 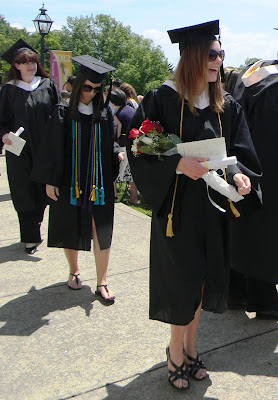 As graduates filed out at the conclusion of commencement, Katy laughed when she saw our familiar faces with cameras pointed at her. 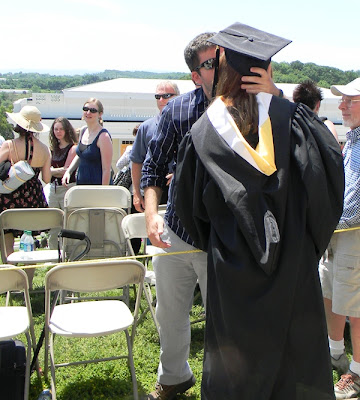 She paused long enough for a quick kiss from her fiancé as she passed by our seats along the aisle. 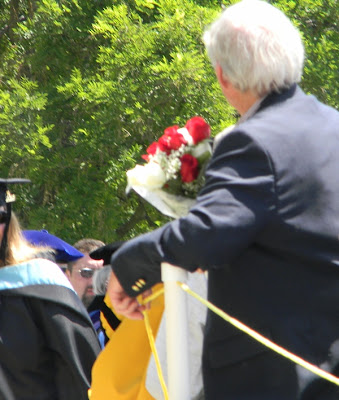 SWAC Husband waited for his little girl and handed her a congratulatory bouquet of roses as she walked past during the recessional. 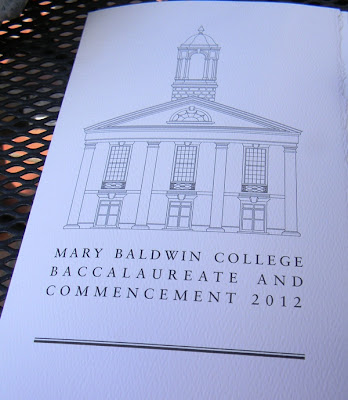 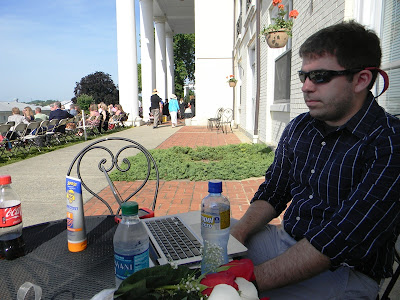 We enjoyed the coolness of shade before commencement. 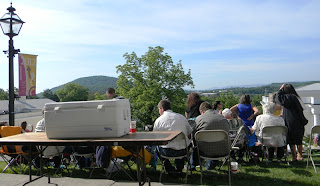 Coolers of iced bottled water were provided by MBC and, with the temperature approaching 80 degrees on a cloudless sunny day, water was very popular. 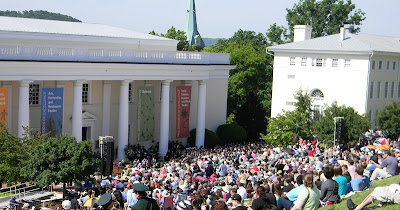 On the hill in front of the library. 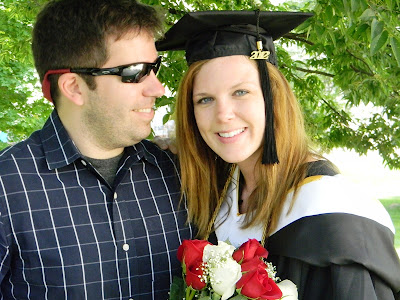 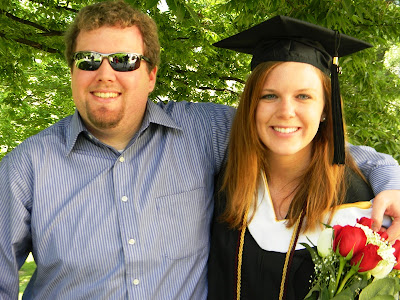 Brother and sister ... both college graduates ... both were homeschooled. 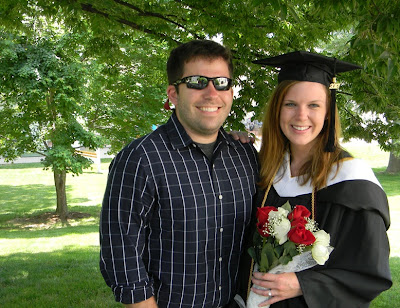 We sought the shade of the large trees on MBC's campus to cool down and take a few more photos before heading home. 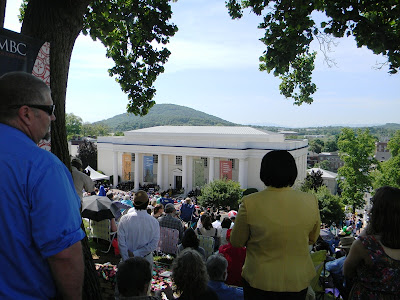 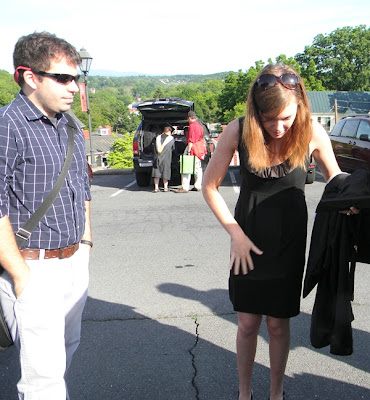 Mary Baldwin parking lot at 8:30 Sunday morning. With a 10:00 start time for commencement, we got one of the last parking places on campus.
~


"Be careful to leave your sons well instructed rather than rich, for the hopes of the instructed are better than the wealth of the ignorant."
-- Epictetus


Pomp and Circumstance makes me tear up. It signifies an ending ... but then it signifies a beginning, too, of another phase in life's journey. I've listened to it as each of my two children graduated from college and it was emotional both times.

I positioned myself on the lawn to take photos as the Class of 2012 filed in to the strains of Pomp and Circumstance ... and as I directed the camera toward the grads, my eyes welled up. "Stop it," I thought as I quickly recomposed myself. It was a joyous occasion, a celebration of yet another milestone along our daughter's journey in life ... not a time for tears.

It was the same when our son graduated from James Madison University a few years ago. As we sat in the bleachers of the football stadium that day, my mind drifted back in time, remembering the sixteen years spent educating my children at home.

Now, my kids have accomplished something that I never did. Armed with only a high school education, lots of determination, and a love of learning, I was able to teach two children at home, and watch them go on to excel in higher education and graduate with honors.

They learned reading, writing, arithmetic, and spelling at the dining room table. But it didn't end there ... the world was our learning lab and we took our studies everywhere. There was biology at the farm pond, Virginia history at a picnic table along the Skyline Drive, sea life at the aquarium in Manteo, civics lessons at Williamsburg, survival lessons at Jamestown, and our travels out west and regionally were full of history and geography.

It was an adventure not just for them but for me. If it snowed, we were able to get our lessons finished and head outdoors to do a little sledding. If there was a hurricane, we studied what made that happen and watched The Weather Channel. Baking in the kitchen involved fractions and measuring and chemistry ... a trip to the Frontier Culture Museum and other living history sites provided hands-on learning about those who walked this land before us. Reading was a daily occurrence as we took books everywhere and read about many places and people. Poems, short stories, historical novels, Little House on the Prairie ... we covered them all.

While some homeschool families chose to enroll their high schoolers in the public school system, we continued on at home and both kids graduated with their homeschool peers. They did well on SATs but I was concerned something may have fallen through the cracks when it came to college.

Not to worry. They both were more than adequately prepared for college, and instructors were impressed at their willingness to learn, their work ethic, and their writing abilities -- something I've seen in other homeschoolers when they entered college. I began to ease up on myself a little ... perhaps we had covered most of the educational bases. When our son graduated from JMU, I knew I could say that homeschooling worked.

Sunday was further confirmation of that. Katy took what she had learned at home with her to the next level and aced her studies in college while working two part-time jobs to help pay for it all. The last semester was especially stressful but she put her nose to the grindstone and graduated with honors. We couldn't be prouder of her for what she has accomplished.

So as her brother, dad, fiancé, and I watched, she walked across the stage and received her diploma ... and we screamed and yelled for her ... and my heart was bursting with happiness. She had done it. We had done it.

Some thoughts about commencement....
Mary Baldwin College is made up of a group of stately white buildings that overlook historic downtown Staunton, Virginia, in the central Shenandoah Valley. The Class of 2012 was the largest graduating class in their history ... over 400 students received their degrees in everything from Shakespeare studies to Master of Education to Bachelor of Arts, Science, and Social Work. Katy's name was read at the beginning of the ceremony as one of the senior honors students who had achieved 3.75 GPA or higher for both semesters of their senior year, and honor society, as signified by the cords worn with her graduation gown.

Keynote speaker....
The keynote speaker, Abigail Disney, 52, is an activist and great-niece of Walt Disney (his brother, Roy, was her grandfather). She is the mother of four and, on this particular day, she found herself looking into a sea of faces that were cooking in the 80-degree sunshine. She started out her remarks with, "Once upon a time there were two princesses.... Sorry, I have to start every speech that way!"

There was laughter from the crowd, and she continued with her remarks. As the sun beat down and her speech continued, the crowd became restless. Some left their seats to seek shelter in the shade of nearby trees or buildings ... others slathered on another layer of suntan lotion. It smelled like a hot summer day at the beach and, I've got to admit, I would hate to have been that speaker in those conditions when what most people wanted was to hear that one name of their loved one and watch them walk up front to receive their diploma. Minds wandered ... programs fluttered like fans to stir the air ... babies cried and were whisked away by parents.

After thirty or so minutes, Disney snapped wandering minds back to her speech with the words, "To the Class of 2012, congratulations! You're all princesses!" Interesting words since there were men graduates, too, but all applauded thinking she was finished. But she had a few more words and then concluded with, "Congratulations to the Class of 2012!"

Diplomas....
At 11:22, after beginning at 10:00, the part of commencement that all were there to see finally began as graduates made their walk across the stage and back to their chairs marking the conclusion of years of study, and marking the start of the next part of their journeys.

After all diplomas were handed out, concluding remarks were made and the Stonewall Brigade Band played as graduates filed across the library portico and up the stairway to the top of the hill, passing loved ones and friends who snapped photos and shouted out congratulations.

It was a great day.  We are proud of all that our daughter has accomplished. In the words of Walt Disney, "If you can dream it, you can do it!"

~
"The things taught in schools and colleges are not an education, but the means of education."
- Ralph Waldo Emerson

Congratulations on your daughter's graduation!