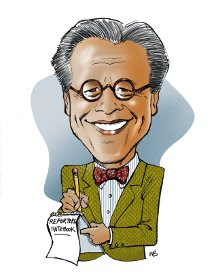 He's known by some as the poison quill and by others as a brilliant political pundit but on Tuesday Jeff Schapiro was known as the roastee who was skewered by some of the biggest names in Virginia politics including U.S. Senate candidates George Allen and Tim Kaine, and Bearing Drift's own Norm Leahy was there to witness it all:


While it lacked both Dean Martin and a host committee clad in evening wear, the Virginia Public Access Project’s roast of RTD columnist Jeff Schapiro held Tuesday afternoon in downtown Richmond was quite an event. The ballroom was packed with pols, lobbyists, their hangers-on, assorted pressies and others. The others included me, sitting in the back, close to a door, just in case.

The Times-Dispatch's bow-tied wonder showed he could give as well as take as he volleyed verbal zingers at men who have in the past been targets of Schapiro's written barbs -- and will be again in the future, I'm sure. Wouldn't it have been fun to be a fly on the wall ... or on the dessert ... or on Tim Kaine's forehead?

Tuesday's roast provided a light-hearted moment in the middle of a fiercely intense 2012 battleground state campaign for Allen and Kaine before all dispersed back to their battle stations.
Posted by Lynn R. Mitchell at 5/30/2012 10:45:00 AM