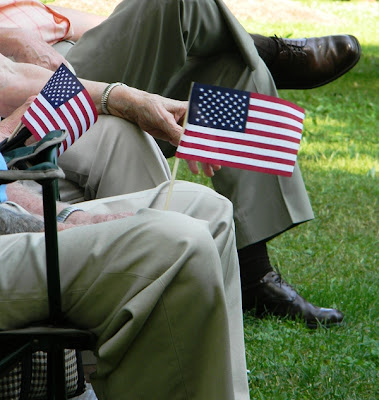 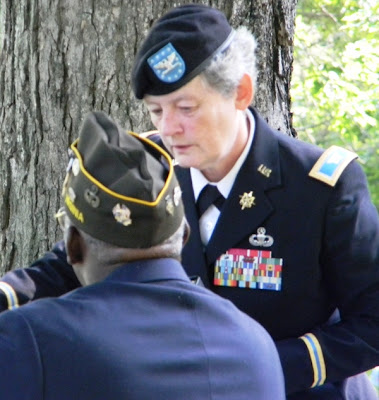 Retired Army Col. Melissa Patrick (MBC Class of 1978), a decorated veteran who has received many awards including Legion of Merit, Bronze Star, Defense Meritorious Service Medal, and Meritorious Service Medal, was the keynote speaker. She is second in command of Mary Baldwin College's (MBC) Virginia Women's Institute for Leadership (VWIL) program. Her remarks were a remembrance of the fallen heroes from the Staunton area. After the program, I asked if she would share her remarks and she graciously agreed. They are below. 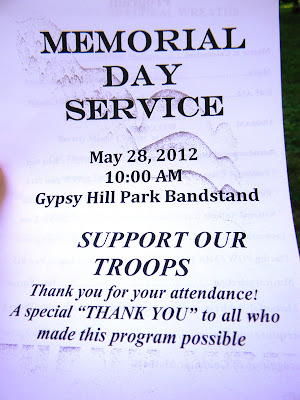 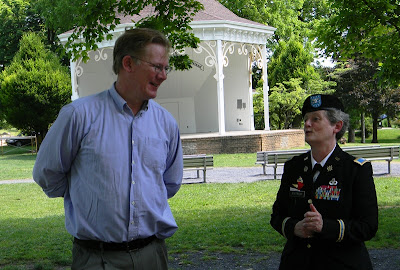 Bruce Elder attends the Gypsy Hill memorial every year. His family has many military members who served throughout the years. 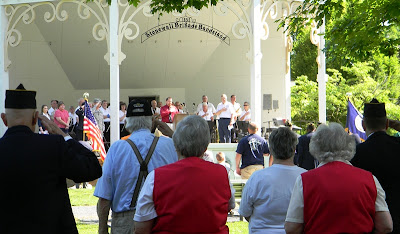 They served and came home, and today they took part in keeping the memory alive of those who did not come home. 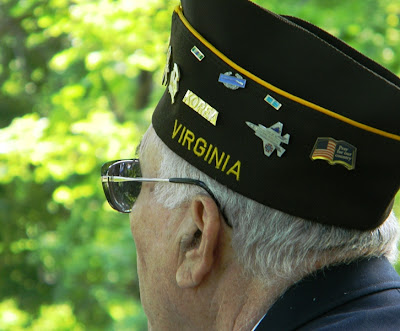 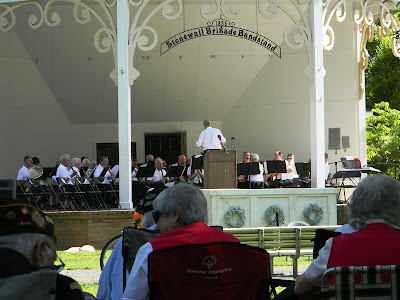 
"Thank you for this opportunity to speak today.  I am humbled to be asked to address you and to be in the presence of our veterans, their families, and the caring people of this great community.  Thank you for being here today to join in this celebration of remembrance for those who have given their lives in the service of this great nation of ours.  Memorial Day is a truly special day as we remember and honor the sacrifice of the 1,343,000 military members who have given their lives in service to protect our freedom and preserve it against all threats.

"Think about it: 1,343,000 war dead in the service of America; fighting and dying on our behalf; from the eight militiamen killed in Lexington on April 19, 1775 to the two latest casualties announced in our ongoing eleven-year war in Afghanistan, who represent the current sacrifice and loss.  Just a statistic, a very large number; one that is hard to fully comprehend.  Yet, it represents real flesh and blood, some of the best that this nation has to offer.


"Consider the two young men who gave their lives in Afghanistan the end of last week.  On Thursday, 23 year old Army PFC Cale C. Miller, a native of Olathe, Kansas, assigned to 4-23 Infantry, 2d Stryker Brigade, 2d Infantry Division was killed in Kandahar. He had enlisted about a year ago because, “He wanted to do something bigger than himself,” “He wanted to feel good about what he was doing.”  He deployed to Afghanistan about six weeks ago as a driver of a Stryker armored combat vehicle.  Reportedly he was trapped under the burning vehicle and told his squadmates to save themselves rather than worry about rescuing him.  In a statement, his family said Miller’s “final act on this earth was selfless, and his sacrifice prevented the deaths of several of his battle buddies.”


"That same day, USMC Corporal Keaton G. Coffey of Boring, Oregon, serving with the 1st Marine Expeditionary Force from Camp Pendleton, California, was also killed in Helmand province.  On his second tour of duty in Afghanistan, the 22 year old was due to be married in July.  He had dreamed of becoming a firefighter like his Dad.
"That 1.3 million represents mostly young men and women, with the best years of their lives ahead of them who lived and loved, who played, dreamed and laughed,...and who did their duty and faithfully served.
"On this Memorial Day, how do we remember them?  While Memorial Day is more than just the first day of summer, which it so often seems to be reduced to, it is not a day of mourning, but rather a day for honor and respect, appreciation for the gift of freedom and the sacrifice that it takes to preserve it.  As we happily enjoy the fruits of freedom with barbecues and picnics, let us not forget those who have paid the price to secure it.  We should also take some time today to reflect on those who served and died.
"For me, as for many of you, there are personal memories.  I will always remember Captain Michael Ritz, US Army.  Mike was a fellow cadet in my platoon at ROTC Advanced Camp at Fort Bragg in the summer of 1977.  A Citadel cadet, Mike was a natural leader, who drafted our off-color platoon song which we sang lustily to the delight of the “Black and Blue” squads of instructors from the 82d Airborne Division.  A football player for the Citadel who dreamed of being drafted by the NFL, Mike went on to serve in the Rangers and the 82d Airborne Division.  In October 1983, Captain Mike Ritz was one of the 82d Airborne company commanders during the invasion of Grenada.  Leading his company from the front, Mike took the brunt of a Cuban machine gun salvo and was killed.  After all these years, who even remembers that we invaded Grenada, much less that Americans shed their blood there?  Yet a few of us do…I can still remember Mike’s square jaw, his deep voice…and the sacrifice that he made for our nation.
"All around us, in this community are local tributes to and reminders of those who gave their all for us.  The host organization of today’s ceremony, American Legion Post 13 is named to memorialize two local men from World War I: 2d LT Jay F. Clemmer, 318th Infantry, killed in August 1918 in Aisne France, and Sergeant Robert A. McGuffin, Staunton Military Academy graduate, who served in the 116th Infantry and was killed October 1918 in the Meuse-Argonne.  Our colors were presented today by the Thomas-Fields VFW Post which memorializes two local African-American service members of WWII: PVT Cyrus Glenwood Fields, QM Corps, who died on Christmas Day, 1944, and Charles R. Thomas, Officers Cook 3d Class, USN.  Just to my right is the Thomas D. Howie Armory in memory of MAJ Thomas Howie, SMA instructor and commander of 3d Battalion, 116th Infantry, killed by mortar fire as his unit advanced on St. Lo in the breakout from the Normandy beaches.  Having said, “I’ll see you in St. Lo” to his commanding general, his troops placed his body, draped in the American flag, on the hood of the lead jeep so that he was the first American to enter the city and then laid him on the rubble of the cathedral, where he was immortalized as the “Major of St. Lo.”  The Howie Rifles of Mary Baldwin’s Virginia Women’s Institute for Leadership perpetuate his memory.  I drive daily past Tullidge Drive and Tullidge Hall, named for Sergeant George Tullidge, who grew up in Staunton and joined the Army at 18 years of age after graduating from Staunton Military Academy.  Two years later, as part of the 507th Parachute Infantry Regiment, he jumped with his unit to support the Normandy invasion.  He was killed on June 8th, 1944 when severely wounded, he took over a machine-gun position overlooking the road from St. Mere Eglise and held off the German counter attack allowing his wounded troopers to be rescued. He died of his wounds and never left his post to seek medical attention.  Climb Cannon Hill and view the 31 names on the World War I monument there; or view the plaques on the Memorial Wall with the names of 100 SMA graduates who died in 4 wars.
"We all drive past the Avenue of Trees, memorializing over 300 area war dead since WWI to the present day along several of the major roads into town.  Several days ago, I stopped at the newest trees, added along the road to the Frontier Culture Museum for 3 Marines killed in Iraq in 2005 and 2006.  Three bridges in Augusta County remind us of the lives and sacrifice of Lance Corporals Jason Redifer, Daniel Bubb, and Daniel Morris.  The national cemetery on Richmond Road contains hundreds of graves, including 749 Union soldiers, most of them unknown.  One can visit the newest grave there under the tree against the east wall for Thomas E. Hodge II, who served in Iraq.  Thornrose cemetery contains the remains of over 1700 Confederate soldiers, many of them unknown and buried in a mass grave.
"While today is one special day of remembrance, these reminders of sacrifice that surround us also serve to remind us that service and sacrifice are constant and are always with us.  We are blessed as a people that in every generation there are brave men and women who will step forward and swear to support and defend the Constitution of the United States and our way of life.

"We are ever in their debt…"