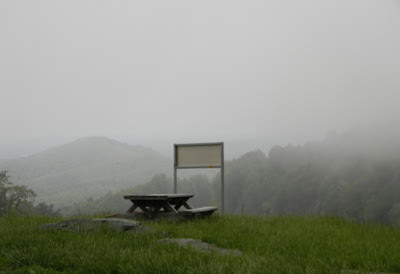 Even though there was fog in the background where this picnic table sits at the Visitor Center on Afton Mountain, you could still see the mountains when I first arrived ... 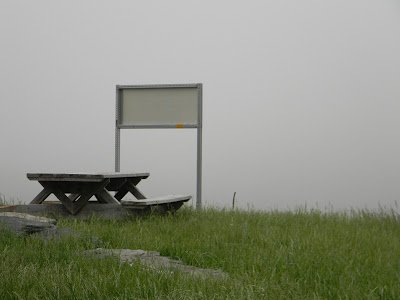 ... and then the fog rolled in and obliterated the view. 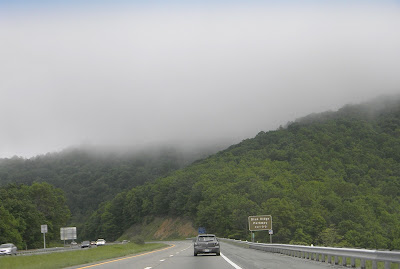 On my drive up I-64 from the Valley to Afton, I could see that the top of the mountain was socked in. 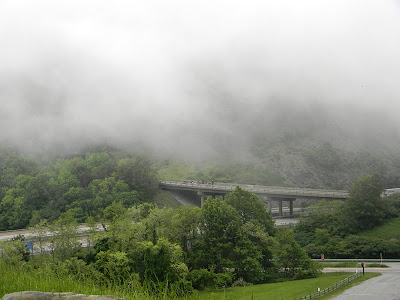 Skyline Drive where it crosses I-64. The fog lifted briefly and swirled past before completely covering the area just before dark.

One reason I love living in the Shenandoah Valley is our easy access to the mountains that surround us. At any given time we can be in the Blue Ridge, Appalachian, or Massanutten Mountains after a short drive.

I made the trek up Afton today, a good mid-way point to meet another George Allen for U.S. Senate coordinator from the other side of the mountain. Fog covered the mountain ridges and, by the time I parked in the Visitor Center overlook, fog was rolling past as the wind blew it toward the Valley. It was mesmerizing to watch it obscure the mountain views and then open it up again.

It was also good to meet up with this old political friend. We first met in 2000 during the George W. Bush/George Allen campaign and I was thrilled to hear he was the Allen coordinator for his county during this 2012 election cycle. He's a hard worker and dependable and admires Governor Allen. We loaded signs into his car, and then we spent an hour catching up on the latest political news.

Our conversation ended when a hiker came off the Appalachian Trail, walking across the parking area heading toward Waynesboro. My friend asked him how far he had hiked that day and then offered to drive him to the overnight shelter in Waynesboro, a good place to be on this rainy night. The hiker gratefully accepted and, as they loaded his pack into the car, my friend and I said our good-byes, knowing our paths will cross again during this campaign.

As they pulled out of the parking lot and headed down the mountain toward Waynesboro, I headed to the interstate to make the drive back to Staunton and, behind me, the fog rolled in, settling over Afton, the Skyline Drive, and the mountain ridges. It's going to be pea soup up there tonight.