Thoughts while driving home from Richmond 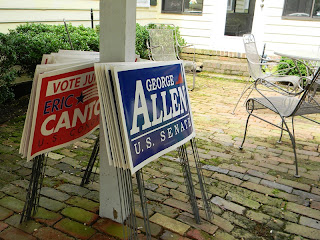 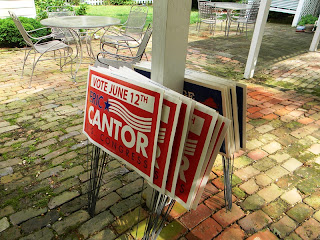 Yard signs for Congressman Eric Cantor and U.S. Senate candidate George Allen are at my parents' home in Midlothian for distribution to supporters in the area.


I spent several busy days in Richmond this week ... Midlothian, specifically ... and my thoughts rambled around as I drove back to the Valley Thursday afternoon.

Allen Headquarters: My parents spent Wednesday volunteering at George Allen for U.S. Senate headquarters in Henrico by putting together signs. Mom has been making phone calls to her list and delivering yard signs around Salisbury and beyond. We've tried to get her to take it easy after her health scare earlier this year but I drove past Allen and Eric Cantor signs that my folks had put out around Midlothian. I can't get the campaigning out of her. Go, Mom, go!

Frog-strangler downpour: While leaving Midlothian this afternoon, the sky opened up and we had a downpour that made driving almost impossible. Midlothian Turnpike near VA-288 had water standing on the roadway causing vehicles to slow down while windshield wipers were on high speed. What a mess! Thankfully, as I crossed the James River Bridge on 288, the rain almost stopped, and though I ran in and out of it heading west on I-64, there weren't any more downpours like in Midlothian.

Speaking of rain: SWAC Husband said we had our fair share of downpours in our corner of Augusta County while I was gone ... so much that it washed out the driveway twice! He shoveled it back after the first one ... now it's ready to be done again.

Virginia countryside: Driving between Midlothian and the Valley is a peaceful experience. Interstate 64 isn't as busy as I-81 and I-95, and the scenery is relaxing ... trees and countryside in this historic state. On Tuesday, Mr. Jefferson's mountain was covered in fog as I passed through Charlottesville and, as in the past, I thought about Mr. Jefferson with his inventive mind and curious nature, and wondered what he would think about the world that has developed around Monticello. What a difference in travel time between his mode of transportation to Richmond -- horseback -- and my car zipping at 70 mph down I-64.

Graduation 2012: There have been many graduations this year including SWAC Daughter's on Sunday from Mary Baldwin College.  It's a busy year for us because she will be getting married this fall. Can you say "wedding planning"?

Shenandoah National Park: It's going to be a nice weekend for those who want to head for the hills. The Skyline Drive offers a nice drive along the Blue Ridge mountaintops and is sure to be busy this holiday weekend.


Memorial Day: Freedom is not free, and Memorial Day is the time to pause and remember our fallen heroes who gave the ultimate sacrifice for America. Our freedom to enjoy the long weekend is due to these men and women throughout our history who have fought and died. Freedom is not free.
Posted by Lynn R. Mitchell at 5/25/2012 06:50:00 AM