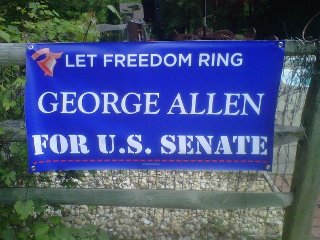 Letter from the editor in today's InsideNOVA endorsing George Allen for U.S. Senate on June 12:

As we choose a Republican Senate candidate June 12, it is imperative that we select a strong conservative who will work actively on behalf of not only Virginians but also our nation. Two of the things which will determine our success as a state and nation are federal fiscal responsibility and overreach of departments such as EPA, especially in the areas of energy production.

George Allen has been working tirelessly for years to expand Virginia coal and natural gas energy production, and has been an advocate for safe offshore oil drilling for Virginia. Our country must become energy independent and it can by utilizing our abundant resources. But if the EPA restricts that use as it has already and increases restrictions, independence is impossible.

Fiscal responsibility -- spending within our means -- is much less achievable if the economy is hampered by scarce and high-priced energy, the engine of the economy.

George Allen has been a strong and effective congressman, governor and U.S. senator. As senator, I believe he will speak strongly for the domestic energy development we need and against the regulations that are constricting all forms of commerce in America.

I support Allen and hope Virginia will on June 12 and in November.