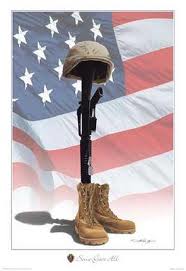 This song was inspired when lyricist Dave Turnbull heard the story of a young soldier killed in Iraq. Teaming up with Jerry Spillman who wrote the melody, they put the story to music to honor those who had died to protect America. A successful lyricist in Nashville, Mr. Turnbull sent a framed copy of the lyrics in 2006 to his cousin, former Augusta County Republican Committee chairman Kurt Michael, who delivered it to the mother of a local fallen Marine.