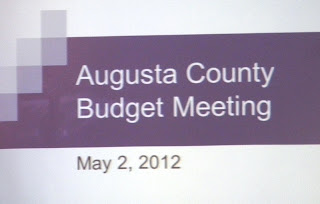 The Augusta County budget meeting Wednesday night was different from previous years. Items were removed from the proposed budget and voted on line-by-line, showing divides between supervisors. My pen could barely write fast enough to keep up with the split votes that occurred, often 4-3.

Reporters Bob Stuart with The News Virginian, Calvin Trice with The News Leader, and Ken Slack with NBC-29 all have good articles covering the meeting.

In a year that has demanded difficult decisions from five new members of the seven-member board, it was refreshing to know that all had deliberated about the budget shortfalls, always mindful of their constituents who struggle day-to-day to pay their own bills.

With the economy still sputtering along with no one knowing when it will crank back into high gear, the question of whether to raise taxes weighed heavily on the mind of one young supervisor who had promised his constituents he would do his best to cut spending before raising taxes.

David Karaffa, the only supervisor to hold a public town hall meeting to discuss the proposed tax increases, had come under fire from some in the community. Most negative comments were the result of misunderstanding or lack of understanding the budget process including the burden localities have faced this year due to unfunded mandates passed along from legislators in Richmond. Those mandates were voted on by state representatives that include local reps Senators Emmett Hanger and Mark Obenshain, and Delegates Steve Landes, Dickie Bell, Ben Cline, and Tony Wilt.

The unfunded mandates have had deep repercussions at the local level including passing along Virginia Retirement System (VRS) costs, as noted by the News Advance:


One of the biggest burdens Richmond has foisted on local government entities ­— city councils, boards of supervisors and school boards — is the recapitalization of the Virginia Retirement System. And it’s close to becoming the straw that breaks the backs of local governments and local taxpayers. [emphasis added]

As a result, local governments throughout the Commonwealth have wrangled with making ends meet in order to fund schools and core services for citizens.

After many cuts, long hours pouring over the budget, and realizing the need for revenue, Karaffa was hesitant to take funds from the reserves that had been set aside for other costs, telling NBC-29's Ken Slack:

"Going so far into our savings account wouldn't have been wise," said Augusta County Supervisor David Karaffa.   "However, we went through all the editions of the budget this evening and found where things could wait a year."
...
"It came down to what was critically needed this year, what could wait until next year.  But these are very tough budget times.  The next budget proves it'll be just as difficult, and probably the one after that," said Karaffa.

Karaffa compromised by voting against the three-cent increase on real estate, noting he didn't feel it would be fair using the flawed 2009 assessments. As far as the 32-cent increase for personal property (vehicles), Karaffa made a motion to lower it to 25 cents which would generate around $1 million additional revenue for the county and assure the promised $3 million for the public school budget. It passed on a 4-3 vote with Supervisors Tracy Pyles, Marshall Pattie, and Mike Shull voting against it.
Bob Kirchman at The Journey blog has addressed this issue in his newest THYME Magazine, noting that "the adults are in charge," and writing:


Debate over whether or not to use capital fund money occured at a reasonable point in the debate (and in the open), then the tax debate was again held in public view. In the end, none of us likes paying more car tax, we would like Richmond to pony up, but unlike Washington, Augusta has to pass a real budget. If you were listening, no promises were broken. Hard decisions were weighed and made, and according to David Karaffa we're well on our way to correcting the appraisal numbers in 2014. That, Karaffa says, is the time to set the real estate tax rate. So now is not the time to play 'blame games.' I think the Board of Supervisors actually deserves our thanks for performing an unpleasant part of their job in a responsible manner.