Allen tracker has a front row seat to Allen's return to the U.S. Senate 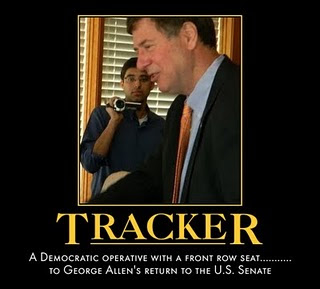 Fishersville Mike picked up on my photo of Alan the Tracker who has been following George Allen for more than a year (and has now been joined by one and sometimes two others). Mike took the photo from a May 2011 luncheon for Governor Allen in Staunton and photoshopped it into this nifty graphic.

That's 23-year-old Alan Piracha's job for the Democratic Party of Virginia. Can you imagine? "I graduated from college and this was the only job I could get." Maybe Alan is tracking for the wrong Party.