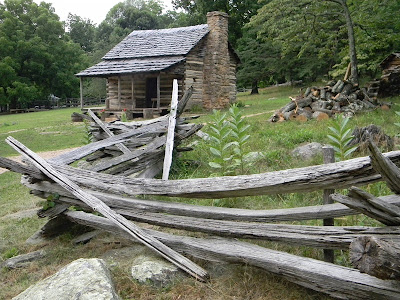 The rains held off Friday so after dinner SWAC Husband and I headed to Humpback Rock Farm for a pre-dusk visit, an unplanned adventure on the spur of the moment to get in a leg-stretcher while enjoying the National Park. 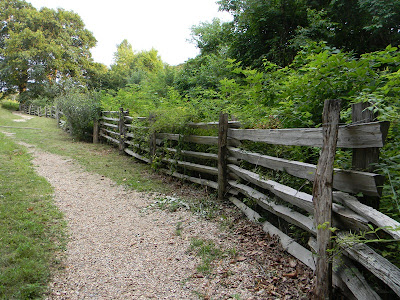 We had the place to ourselves. The Visitor Center was closed in the hour before darkness fell across the Blue Ridge Mountains, and so we delighted in exploring the farm in its summer glory. 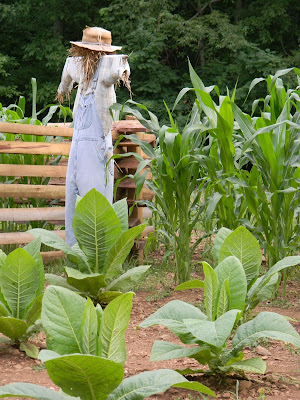 The scarecrow was doing his duty in the garden as he protected corn, onions, tobacco, and other plants from predators. SWAC Husband and I joked that the deer were probably lurking in the nearby woods waiting for us to leave so they could enjoy the smorgasboard of goodies. 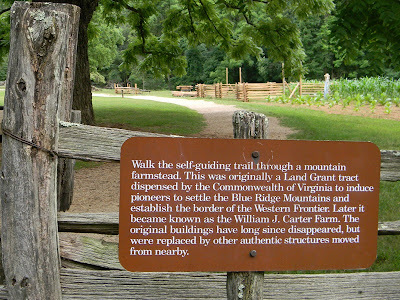 "Walk the self-guiding trail through a mountain farmstead. This was originally a Land Grand tract dispensed by the Commonwealth of Virginia to induce pioneers to settle the Blue Ridge Mountains and establish the border of the Western Frontier. Later it became known as the William J. Carter Farm. The original buildings have long since disappeared, but were replaced by other authentic structures moved from nearby." 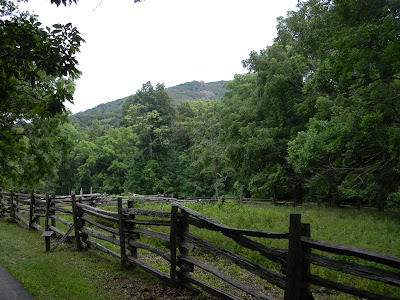 As darkness fell, I took one last photo of the actual Humpback Rock and then we headed back down the Parkway on our way home to the Shenandoah Valley. We feel fortunate to live so close to the Blue Ridge Parkway and Skyline Drive which allows impromptu jaunts at a moment's notice.

This is another one of our favorite spots too. Annie and I used to spend many a Sunday afternoon up here.

My kids used to love to romp around the farm when they were young, too. It's a reminder of where my great-grandparents came from, working hard on those mountain farms to eek out a living and raise a family. It's also a reminder to be grateful for the work ethic they instilled in those of us who came behind.