Obama stumps in VA again ... is he worried? 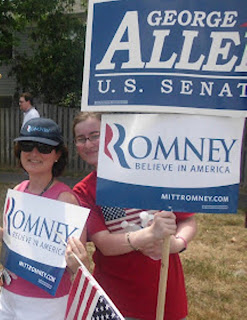 Photo by Smitty at The Other McCain


With President Barack Obama swinging through Virginia yet again, one has to wonder if his campaign is worried about this purple-working-hard-to-turn-back-to-red state. Why else would he expend valuable time and resources returning again and again?

Perhaps yesterday's outdoor rally in Mechanicsville in the pouring-down rain will be an indicator of how the 2012 election will go for Obama. Democratic supporters stood in a downpour ... the President's shirt got drenched and stuck to his skin ... he wiped away the river of rain as it streamed down his face and tried to remain optimistic. Hasn't anyone in his camp heard of an umbrella?

Meanwhile, nipping at his heels, conservatives were making sure he knew there was opposition in Virginia. Conservative bloggers Stacy McCain and Smitty from The Other McCain got great photos of the crowds, made up of Republicans as well as  Democrats, waiting for the President's arrival in Fairfax County.

Marooned in Marin also got great photos along with video of the Centreville rally.
Reports of those outside the area showing up continue for these rallies. Commenters at Instapundit reported that the Fairfax gathering had supporters from the notoriously-blue state of Maryland, and we heard supporters were bused in for the Roanoke rally on Friday night.

Bottom line: Don't be fooled by outward appearances. The Emperor has no clothes and Republicans are going to prove that in November.