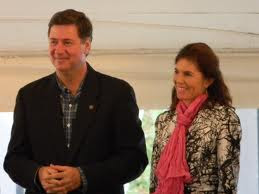 
The stage is set for today's U.S. Senate debate at The Homestead in Hot Springs, Virginia, as candidates George Allen (R) and Tim Kaine (D) meet for the second debate between them in this race. Hosted by the Virginia Bar Association, the ticketed event will be moderated by CNN's Candy Crowley.

Both men are former governors of the Commonwealth. Allen has also served as a Delegate, Congressman, and U.S. Senator while Kaine was once the mayor of Richmond and chairman of the Democratic National Committee.

Both camps have been in pre-debate prep leading up to today. George Allen is a skilled public speaker and debater who went through three debates against three opponents prior to winning the June Republican primary with 62% of the vote.

Virginia is a battleground state, one of the closest-watched races in the country. Polls have consistently shown Allen and Kaine in a tie. This week's Quinniapiac poll had Allen up 46 percent over Kaine 44 percent.

After the debate, Governor Allen will head to Richmond where he will address the Virginia American Legion’s 94th Annual Convention in Richmond at 3:30.