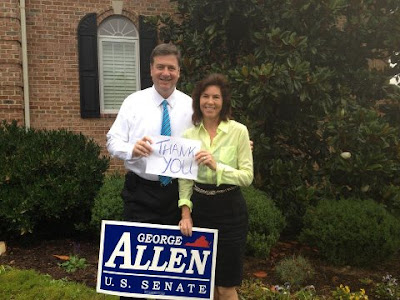 On a warm spring day this past May, Susan Allen made a campaign stop in the central Shenandoah Valley city of Staunton at the popular Wright's Dairy-Rite.

She was there to greet supporters of her husband's bid to once again become Virginia's U.S. Senator, a position he had previously held before his razor-thin loss in 2006. She warmly greeted and chatted with diners at tables, and posed for photos with the owners who beamed at this next campaign phrase in Allen's career. They had been there in the early years when he was Governor and then Senator.

To say she is the wind beneath his wings would be a huge understatement. Susan is George Allen's biggest advocate, often traveling separately from him as they endeavor to cover as much ground and reach out to as many Virginians as possible in the tightly contested race.

George Allen versus Tim Kaine ... two former governors running head-to-head in a contest that has the polls showing a dead heat between these icons from the Republican and Democratic parties ... and so the reinforcements are needed more than ever.

Two secret weapons are in Allen's camp, and one is his wife Susan. With a bubbly personality and genuinely warm smile, she is everywhere as she shakes hands with businessmen and moms and shop owners, listens to constituents as they share Allen stories from the past, and as she thanks the volunteers profusely for all their help, words that are greatly appreciated by all including some who have been there for years.

Mrs. Allen's day had begun early on that May afternoon when she stopped in Staunton, one of four or five events for the day, and would not end until her SUV pulled back into the driveway of her Northern Virginia home in the wee hours of the morning. Day after day, week after week, month after month, the routine is the same but the locations and faces are different. Parades, county fairs, committee meetings, walks on Main Streets, lunches at restaurants, tours of businesses ... nothing is too small if it means meeting and greeting George's supporters.

She speaks fondly of  her husband and reminds voters of his accomplishments over his years of service to the citizens of the Commonwealth, first as delegate, then Congressman, then Governor, and finally as U.S. Senator. She talks about his track record for creating jobs, cutting spending, lowering taxes, and his belief in small government. Her goal is to see him reelected so he can continue that conservative leadership, a job that will keep her on the campaign trail through Election Day.

George Allen's other secret weapon is close friend, ally, and confidant Mike Thomas. Together for more than 20 years, Thomas has the good fortune of being in the pressure-cooker campaign manager job for one of the top Senate races in the country.  Principled in his conservative beliefs, he knows campaigns are won with strong grassroots support and lots of hard work. Perhaps most importantly, he admires, respects, and believes in George Allen.

A graduate of the University of Richmond, Thomas is a husband, father, grandfather, and Children's Church leader in his church. He held positions as Chief of Staff and State Director during Sen. Allen's time in the U.S. Senate, and served the Commonwealth of Virginia over the years as both the Secretary of Administration to the Commonwealth, and as Director of the Virginia Department of Information Technology. The past fifteen years he has been in leadership of the Republican Party of Virginia as its First Vice Chairman.

Mike can be a quiet presence but don't let that fool you. Beneath that exterior is a determined, hard-working networker who is one of the most-admired men in Virginia Republican circles. His choice by Allen to lead the A-Team was met with cheers from long-time supporters, many who had been around when he helped lead them to a come-from-behind victory as campaign manager in the 1993 gubernatorial win. It also provided a steadying presence that signaled the campaign was serious about winning both the Republican nomination and the Senate seat.

The first part of that was accomplished when Allen beat out three opponents in the June Republican Primary with 62% of the vote.  Mike, always with a ready smile, was generous as he thanked all who made the win possible and deflected any thanks from himself.

With a group of staffers and more than 8,000 loyal volunteers (so far), he is doing what he does best: lead and rally the troops as the Allen for U.S. Senate campaign heads into the home stretch or, as Mike puts it, the Main Event.

Two powerful allies in the George Allen camp ... his wife Susan and friend Mike Thomas ... and both will be working hard for a November victory.