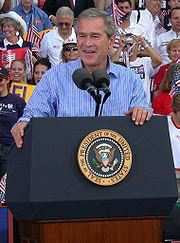 HAPPY 66th Birthday, Mr President! A strong leader after the terrorist attacks of 9/11, President George W. Bush, the 43rd President of the United States, led this nation through those dark days of fear and financial instability.

George W. Bush, the 43rd President of the United States, was sworn into office on January 20, 2001, and served as Commander in Chief for two consecutive terms. Before his presidency, he served for six years as Governor of the State of Texas.

Happy President Bush... may your day be filled with happiness.