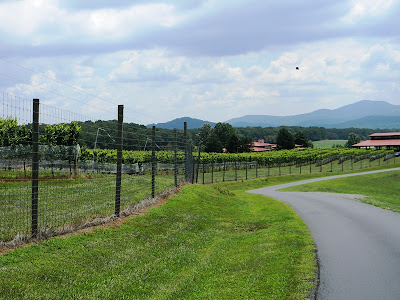 Afton Mountain Vineyards in Nelson County, one of the many Virginia vineyards.

RICHMOND – Governor McDonnell today congratulated Virginia wineries for their recognition at the 2012 San Francisco International Wine Competition. The competition is the largest international wine competition in America, with more than 4,500 wines from 26 U.S. States and 29 countries competing.

“Virginia wines continue to garner acclaim far and wide, which is just one reason why my administration is proud to promote them here in Virginia, across the country, and around the world,” said Governor Bob McDonnell.  “The latest recognition came when the awards for the prestigious San Francisco International Wine Competition, one of the most highly regarded wine competitions in the world, were announced earlier this month.  Just as last year, a number of Virginia wines scored highly against more than 4500 other wines and were awarded double gold, gold, silver, and bronze medals.  The First Lady and I congratulate all of our wineries and wine makers for their accomplishments and for helping raise the Virginia wine industry to higher levels.”

“In particular, we want to recognize Luca Paschina and Barboursville Vineyards for winning 'Best of Show' for their 2007 Malvaxia Passito and Doug Flemer and his team at Ingleside Vineyards for winning 'Best of Varietal' for their 2007 Petite Verdot.  Luca and Doug have been outstanding ambassadors for the Virginia wine industry for years, so it is incredibly gratifying to see their efforts so highly recognized by the discerning judges at the San Francisco International Wine Competition.”

Virginia is home to more than 200 wineries statewide and is fifth in the nation for wine grape production. A recent economic impact study shows that Virginia's burgeoning wine industry contributes almost three-quarters of a billion dollars - or $747 million - annually to Virginia's economy. Virginia wineries and vineyards support 4,800 jobs that provide $156 million total in wages. 1.6 million visitors include a visit to a Virginia winery on a trip. Wine travel in Virginia has gained many recent accolades. Virginia was recently named one of the ten best wine travel destinations in the world for 2012 by Wine Enthusiast Magazine.