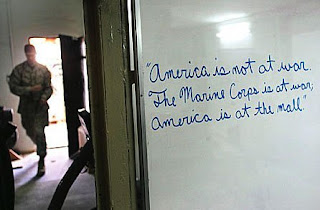 "America is not at war.
The Marine Corps is at war;
America is at the mall."

Email ThisBlogThis!Share to TwitterShare to FacebookShare to Pinterest
Labels: America is at the mall, pro-victory, support our troops, United States Marine Corps, Win the War

And who was it that told America to go shopping? George W. Bush. Let's at least give credit where it's due.

Was that intended to be as snarky as it sounds? Dennis, you have a military background and some age on you ... surely you know why the President told America to go about their business?

As a Nation we were in shock from 9/11 and what had occurred. Our financial market had been hit in the form of the Twin Towers. The airline industry was in danger of collapse since they were the conduit the terrorists used to play out their dastardly deed and were therefore grounded with the possibility of financial disaster.

The President didn't want us to live in fear and, if I recall correctly, he didn't want the terrorists to feel they had won by cowering an entire Nation.

The message I see in the sign is directed toward those people who have gone back to their pre-9/11 mentality. They seem to have forgotten 9/11 even happened or that there are terrorists out there who want to kill us if given half an opportunity.

The message is saying, "Don't forget the troops who are fighting for you."

It's saying, "Don't forget to prepare in the event of a terror emergency at home."

Perhaps we need reminders again of why we went to war in the first place.... Run that TV footage of the Towers falling and the Pentagon burning. Run the reminder again in the newspaper that we should never forget 9/11.

Or ... just be snarky and pile on a Republican President because of politics.