Another dirty trick from the dems ... Google bombing 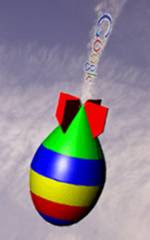 "You dropped a bomb on me, baby," may have a whole new meaning.

Flora at United Conservatives of Virginia points out how the left uses domain names to defame Republicans, and certainly the ODBA's outrage at the Joe Stanley/Roscoe Reynolds dirty trick of redirecting ODBA traffic to a pedophile site that is currently taking place in the Virginia political blogosphere backs that up.

But another dirty trick used by the left to intimidate conservatives is Google bombing. And it may just be a matter of time before it becomes ground zero.

The far left bloggers have perfected the art of intimidation by engaging in a stunt called Google bombing. Google bombing works by asking a large number of like-minded bloggers to post links that point to a specific Web site so that the targeted site will appear near the top of a Google search when a particular word search is typed.

The act of Google bombing artificially inflates the relevance of the targeted site by giving the search engines a false impression of the site's importance. The best known cases are on a national level even though it has happened at the local level.

In the heat of the 2004 presidential campaign, when the words miserable failure were entered into the Google search engine, it took the user to the official George W. Bush website. When the first Google bombs showed up, complaints were filed with Google. However, while admitting the practice was offensive to some, Google proclaimed they had little or no control over it and did not act.

Google finally issued a statement saying, “We don’t condone the practice of Google bombing, or any other action that seeks to affect the integrity of our search results, but we’re also reluctant to alter our results by hand in order to prevent such items from showing up."

Members of the liberal blog umbrella Daily Kos actively encourage participation in this behavior. For example, Chris Bowers, a contributor to the Kos, posted, “Call to Action: Google-Bombing the Election.” In his post, he provides instructions on how to participate in the Google bombing on a nationwide basis during the 2006 elections.

Email ThisBlogThis!Share to TwitterShare to FacebookShare to Pinterest
Labels: extreme tactics of the Left, Google bombing