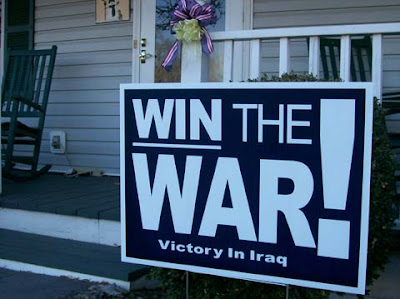 Got a phone call tonight from a SWAC Republican whose son-in-law, an Augusta County native, is a Naval Commander. He has been to the Middle East three times and was recently transferred to the Norfolk Naval Base where he has been assigned to the USS Enterprise.

The reason for the phone call was an email I sent out to SWAC today about the Vets for Freedom's request that we counter MoveOn.org and make phone calls Thursday asking that our electeds allow General Petraeus the opportunity to do his job in Iraq.

My SWAC friend thanked me for passing that information along and said the military men and women are behind the General including her son-in-law. He had told her General Preteaus was a good man, knew his job, and under his command they were getting the job done in Iraq. He also said the military was upset Congress would not give President Bush carte blanche to do what is needed to finish this war.

Every military guy I have talked with who has been over there says the same thing: untie the hands of the military so they can win the war.

Thursday -- please call your Congressman and our Senators and explain the "Cost of Defeat" in Iraq. Tell them that defeat in Iraq would mean the following things:

* A bloodbath in Iraq, costing hundreds of thousands of innocent Iraqi lives and possibly destabilize the entire Middle East region.

* A failed state in Iraq and a safe haven for Al Qaeda to plan future attacks against America and her allies.

Good post! We can win this thing! Petraeus is our man!

Now we need folks to COUNTER MOVEON.ORG and invest 10 minutes today (Thursday, Aug. 16) to call their Congressman and Senators to say, "Let Petraeus do his job."