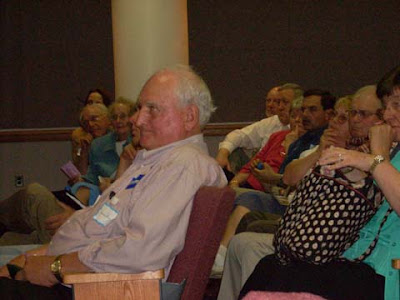 Supervisor David Beyeler in front row center during mass meeting. He was a candidate running against Kurt Michael. 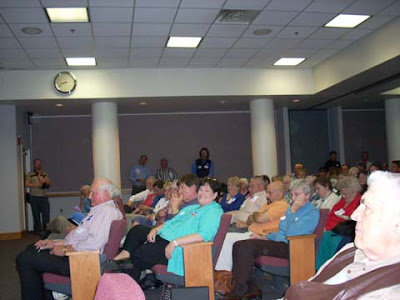 The Hanger people standing along wall.... 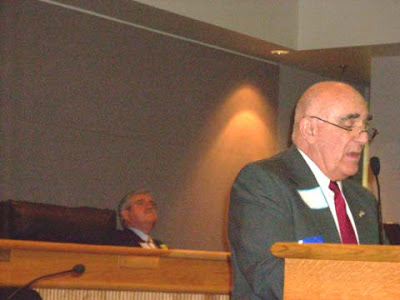 Larry Roller spoke for 23 minutes, spending much of that time singing Emmett Hanger's praises and criticizing Kurt Michael, Lynn Mitchell, and Scott Sayre. In the background is the former Commissioner of Revenue for Staunton City who was asked by the Hanger people to be their parliamentarian. Staunton's Unit defeated Emmett Hanger's candidate 58-20. 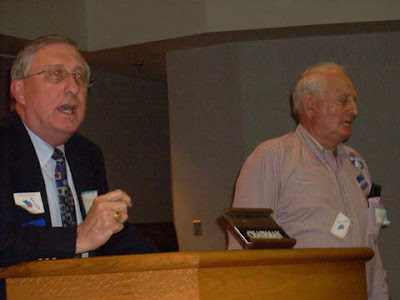 Jim Bailey takes over as temporary chair (but was never voted on as permanent chair) as David Beyeler stands beside him. 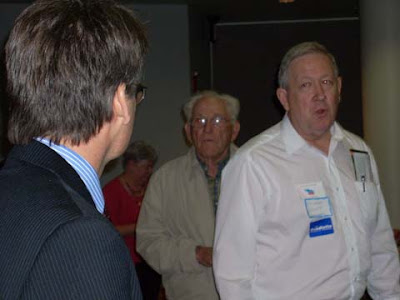 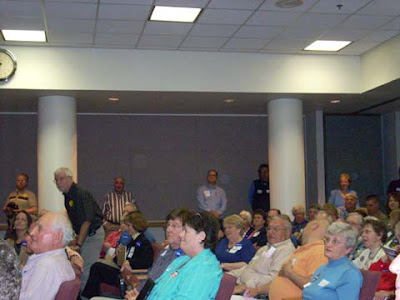 Many Hanger supporters were on one side of the room including Beyeler, Parkinson, Clem, Howdyshell, Kijak, Hanger.... 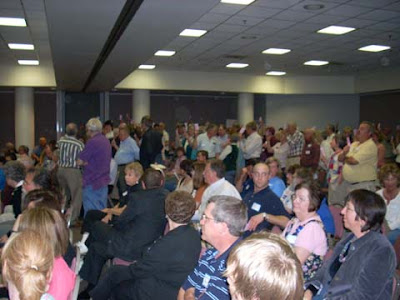 This is one way to grow the Party. When there are intra-party disputes, both sides bring out people. The Augusta meeting had 269 participants.

The venomous rhetoric that spewed from what should have been united Republicans was eye opening. In the name of unification, we were railroaded in a meeting that can only be described as smoke-filled roomish. Larry Roller's vicious attacks on the characters of Kurt Michael, Lynn Mitchell and Scott Sayre caught me with my mouth hanging open. Is this still America? Cannot anyone run for office.

The meeting was handled not only poorly but illegally with motions being made, seconded but never voted upon amid outcries from all corners of the room. There was no order exhibited by Temp Chair Bailey who came to the gathering totally unprepared. The piece de resistance was that the FIRST meeting was adjourned by Temp Chair Bailey with no motion, no second, no discussion and no vote.

Sorrow is what I feel for those young people who are just approaching the political stage. If they witnessed last night they may not continue and in that case, we WILL have lost a great group of future leaders. May their resolve be strong.

I commend those who stuck it out to the end of the LEGAL meeting which arose from the ILLEGALLY adjourned first meeting. One question which prompted the late night fix was the fact that delegates to the 6th District and State GOP Conventions were not seated. My hope is that this was remedied.

My husband and I agree that we have lost respect for OUR elected official Emmett Hanger, and his band of good ole boys. Isn't change what makes this country great?

Yeah you said it man. We might as well let them dems come right in and take over. But I have faith in the party to come together and win in the end. Superior mental attitude and positive mental state will win in the end