What happens when the snapping turtle crosses the road? 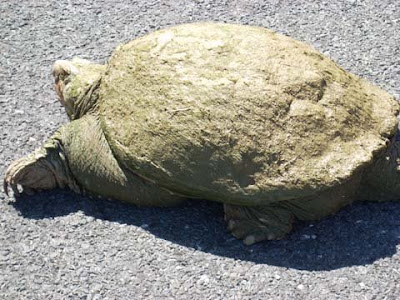 This was a first for me. I roam the country roads of Augusta County and have seen a lot ... but this was the first time I encountered a huge snapping turtle in the middle of the road. 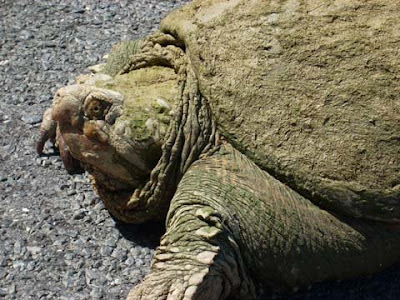 He was covered in mud and appeared to be crossing the road from one pond to another. He looked prehistoric there in the road ... sunning on the asphalt. Thankfully there was no traffic.... 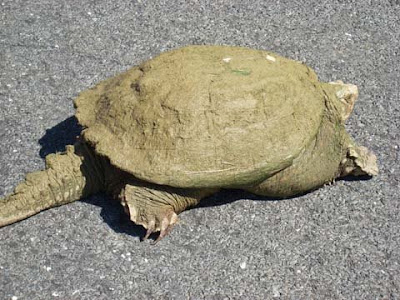 His body was about two feel long and his tail another foot. He was huge. 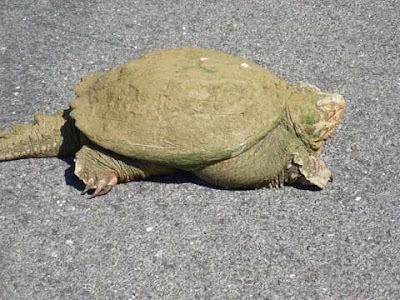 I walked around him and snapped photos ... he just watched. 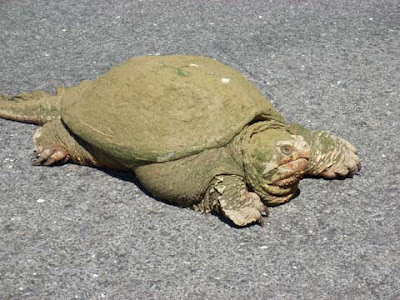 His feet had long claws on them ... and he appeared to be old. I don't know anything about snapping turtles ... does size denote age? He seemed ancient. Never know what you will see on the back roads of Augusta County....

Email ThisBlogThis!Share to TwitterShare to FacebookShare to Pinterest
Labels: Augusta County, spring in the Shenandoah Valley

Where exactly do you live? This appears to be a common snapper. 2 feet would probably make her a female. The reason she is covered in mud would be that snapper spend most to all of there days covered in mud buried at the bottom of ponds and streams. They don't often come to the surface but many times you will see nesting females. Just because she's wrinkly doesn't mean she's old. I think it makes them look cuter. I have a common snapper for a pet and she's only 3 years old and looks like she could be 100. These guys are reptilian american treasures. I'm glad you saw the beauty in them :)