Emmett left the ballots behind.... 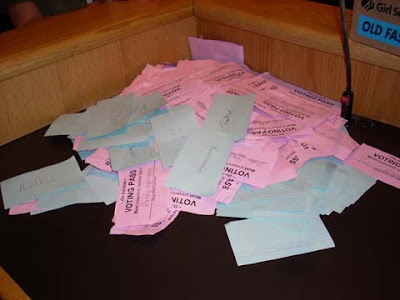 After Thursday night's mass meeting, as the Augusta County Republican Committee was cleaning up, restacking chairs, moving tables, and packing up supplies (Emmett's group had long gone), a startling discovery was found on the supervisors' desk.

The ballots from the first voting of the evening were found where someone from Emmett's group had dumped them on the desk ... and forgotten them. Blue index cards (ballots) were mixed with purple voting passes.

As the credentials committee chairman for Kurt Michael, I had set up a system where each person who checked in was credentialed to vote and given a purple voting pass. They were to write their name on the voting pass and exchange it for a ballot during the voting process.

However, after Emmett's group took over the meeting, they were unprepared with ballots or a means to vote. At one point they asked everyone to write the name of their candidate on the back of the purple voting pass. Someone brought up the point that it would no longer be a "secret" vote since the names were written on it, so blue index cards were brought in to use for ballots.

For some reason Emmett's people decided to have everyone hand in both their purple voting pass and their blue index card.

On the back of almost every voting pass, with name fully visible on the front, was the name of the candidate each person supported. Nothing secret about that vote....

The ballots have now been properly secured by Chairman Kurt Michael as he does after every vote.

I see why Hanger had such trouble with his Lt. Gov. petition paperwork awhile back.....