Kurt Michael: "It's for the good of the Party" 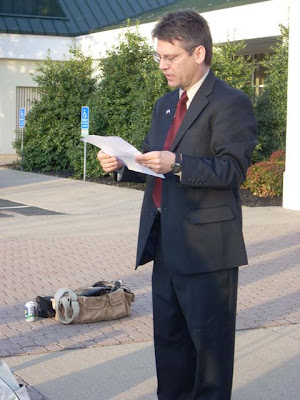 Chairman Kurt Michael reads a statement to the press.

Augusta County Republican Chairman Kurt Michael pulled a Bill Bolling Friday evening and announced he is stepping aside as leader of the county Republicans effective May 31 in the interest in healing the Party as we go into an extremely important election year. He made the following statement to the press who were gathered at the Government Center in Verona:

I will carry on with my responsibilities as Unit Chairman of the Augusta County Republican Committee until after the state convention on May 31st to ensure this process is done fairly and properly. Upon adjournment of the Republican State Convention, and in a gesture of good will, I will step down as Unit Chairman and in accordance with Article IV, Section F of the Augusta County Republican Committee By-laws immediately call a meeting to elect a new Chairman.

I will not seek re-election as Chairman of the Augusta County Republican committee. It is my hope that all involved will cooperate with this process. My best wishes go out to the next Unit Chairman of the Committee in hope that he or she can heal this deep division within our local party.

Now Augusta County Republicans can go back into the slumber they were in when I first became involved in 1999. I believe the term they used was "auto-pilot." I call it laziness.

Augusta County is one of the most active units in the state. But critics, even some who were once within our own close circle, accused us of being "weak," not doing enough, not reaching out. Ah -- the ones who do the least are the ones to complain the loudest in any organization.

How can a unit be "weak" or not doing enough when they:

- Have grown the party from a membership of 10 to 60;
- Have filled the infrastructure with magisterial district chairs and precinct captains;
- Have filled all executive committee positions and held executive committee meetings to map out the direction of the committee;
- Held monthly SWAC-GOP breakfasts averaging 50 people with guest speakers such as Lt. Governor Bill Bolling, Congressman Bob Goodlatte, Attorney General Bob McDonnell, former governor Jim Gilmore, and more;
- Been active in the community with social issues;
- Been active in the community in supporting local troops against anti-war protesters;
- Manned GOP headquarters 7 days a week for 12 hours a day;
- Coordinated lit drops throughout the area;
- Manned phones for Get Out The Vote calls;
- Hosted local and statewide electeds at gala HQs openings;
- Held regular meetings, mass meetings, recruited candidates, worked with candidates, got endorsements for candidates;
- Coordinated with the area Units, Waynesboro and Staunton, to build strong organizations to make a strong SWAC regional organization supporting Republicans whether they were from the city or the county;
- Manned the Augusta County Fair booth each August;
- Started in 2000 entering Republican floats in the Staunton 4th of July, Veterans Day, and Christmas parades;
- Enjoyed doing the jobs, meeting people, and advancing the principles of the conservative Republican Party.

Kurt Michael has been an extremely effective chairman. He has spent countless volunteer hours working for the very electeds who lined up against him -- and with Emmett Hanger -- to crush down on him. They do not want anyone to hold them accountable for the way they vote.

But think about it.

At the mass meeting Kurt brought out 124 people and Emmett brought out 143 (approximately - first "divide the house" when everyone was still there).

If the election had been electoral vote-style as it had always been in the past, Kurt would have won five of the seven districts.

That is extremely telling ... and proof that Kurt did his job as chairman ... and it scares the living daylights out of the electeds who were looking over their shoulders. Now they can couch in for a while in their "appointed-for-life" positions.
Hope they don't get too comfortable.