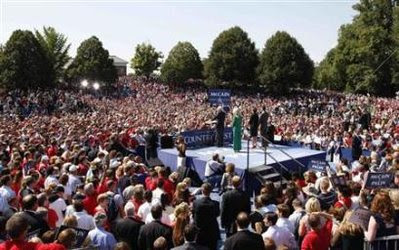 Going into the final days of the campaign it is the McCain-Palin team that is drawing Americans. John McCain and Sarah Palin are people who love and serve our country ... and Americans have responded. This was with a notice of two days ... imagine how many would have turned out if there had been more time!
Posted by Lynn R. Mitchell at 9/11/2008 07:52:00 AM

Yes, the Democrat-dominated Fairfax CITY. Didn't used to be like that.... This proved the GOP can still pull people out in NoVa.