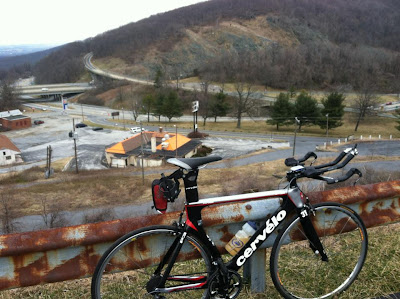 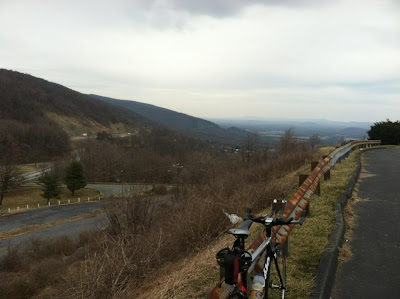 In 2006, there was news that Afton was going to be renovated. However, in March of 2008 I posted photos of the rundown condition of Afton Mountain located at the intersection of I-64 and Rt. 250. It's a beautiful location high atop the Blue Ridge Mountains looking into the Shenandoah Valley to the west and the Rockfish Valley to the east.

A 2004 arson fire had gutted many of the abandoned buildings, leaving charred shells of motel rooms that once graced the mountainside. Owned by Charlottesville businessman Phil Dulaney, there have been rumors for years of revitalizing the area.

Instead of a restaurant or nice overnight accommodations, tourists see burned and abandoned buildings on Afton when they come through this area of Virginia. With the tourism office located in the parking lot of the rundown motel that at one time was a Holiday Inn, there is no way someone passing through looking for travel information would miss the sad decline of Afton Mountain.

A biker responded to my original post, commenting that he regularly biked from Charlottesville to Afton, and that it would be nice to have a place to eat and relax before the return trip. Dr. Mark Robbins, who still bikes throughout the Valley and points east, took the above photos earlier this month. "It's still a mess," he noted.

Staunton resident Bob Kirchman saw my posts about Afton and used his talent as an architectural renderer to come up with some ideas for Afton, playing on the idea that it could become an active village at that halfway point between Staunton and Charlottesville. Using private investments and drawing from a multitude of ideas, Afton could be the gateway to the Shenandoah Valley.

Along with a market place, service station, and cafe, imagine the possibility of having year-round living with the convenience of a short commute to Charlottesville or Waynesboro/ Staunton by way of I-64 yet the beauty of living on the mountain. There could also be guest accommodations for the thousands of travelers who pass that way annually. Ample snow removal equipment would provide ready access 24/7 for residents and visitors.

Think of the jobs that would be created during the construction phase of this vision, something that is badly needed in these difficult economic times. Waynesboro has 7.9% unemployment so a project like this could provide badly needed jobs for many and be profitable for the person who owns the property.


Think of the legacy of Afton. It could return to its glory again ... a living, thriving village of homes, commerce, and tourism ... a beautiful oasis in the sky. As a go-to location for locals from both sides of the mountain, it could be the place for dinner, dessert, a romantic overnighter, or a place to watch sunsets and the beauty of the mountains.

Afton Mountain ... the gateway to the Shenandoah Valley, the Daughter of the Stars.